What Is The Golf Swing Plane?

When you start looking at the golf swing plane you can get confused – FAST!

It’s an area where the more scientific/engineer types seem to have a field day. And if you’re not that way inclined you can read and watch some stuff on the golf swing plane that will just give you a headache!

In today’s article, I’m going to try to keep this nice and simple so we can all be on the same page for the rest of this golf swing plane series.

Now, the golf swing plane first became popular thanks to Ben Hogan and his image of a pane of glass. 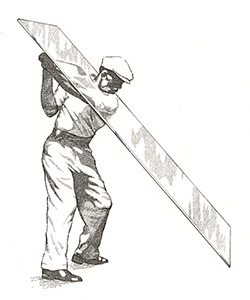 When Ben Hogan was talking about the golf swing plane in terms of the pane of glass, he wanted the the left arm, hands, club etc. to stay below that pane of glass on the backswing and downswing.

But when Ben Hogan’s famous five lessons book was published in 1957, they didn’t have the technology like we do today to dissect the golf swing to the nth degree. And so the concepts of the golf swing plane have evolved a lot from the simple illustration that Ben Hogan gave us.

So what is the golf swing plane?

Well, the golf swing plane is an imaginary flat service that is used to determine what path certain parts of the body and club are traveling on throughout the golf swing.

This may sound stupid, but it has to be said…. the golf club cannot move itself. A lot of times when people look at the swing plane they only look at the shaft. But the shaft is only moving as a result of the body movements. So you need to look very carefully at the plane your body is moving on when looking at swing plane.

There are three swing planes in the golf swing, and they are:

2. The downswing plane, and

That’s why if you see someone analyzing a golf swing, they’ll draw a lot of lines to try to analyze what plane different parts of the body and club are moving on. 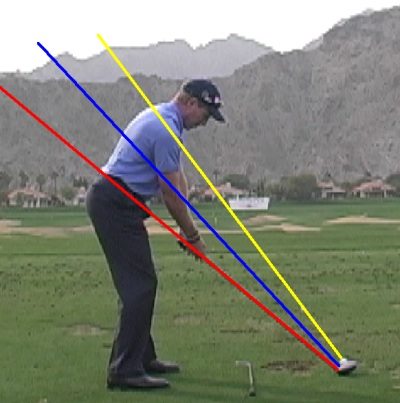 When you swing you’re obviously swinging in a circular pattern. And because you’re bent over when swinging your swing plane is tilted. How much it is tilted depends on the player’s height, how they stand to the ball, the club being used etc. etc. There’s a number of different variables.

So everyone will not have the same golf swing plane because of this. And so there’s no one exact swing plane for everyone. When I say that, I’m talking about absolute degrees of swing plane. But there are good reference points every golfer can use, and I’m going to dicuss these in this swing plane educational series.

When you hear about swing plane you often hear people saying that “so and so” has a flat swing plane, or this golfer has a steep swing plane.

When people say that, what are they referring too?

Most of the time they are referring to the shaft angle. And a good checkpoint is halfway into the backswing. A famous golf pro who is said to have a flat swing plane is Zach Johnson. Here is a picture of Zach at the half-way point in his golf swing. 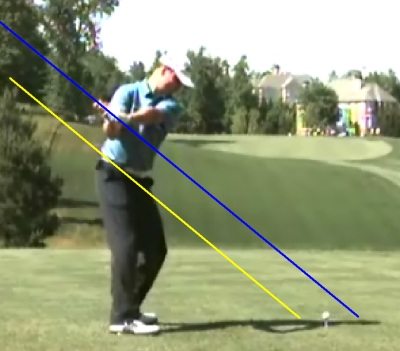 Zach uses a one plane golf swing to hit the golf ball. So anyone that is a fan of the one plane golf swing will not say that Zac’s swing is flat. They’ll say it’s on plane. That’s where golf instructors get into arguments. In my next article I’m going to talk more about the one plane swing, two plane swing etc. But for now, notice that at the half way point in his backswing the club shaft is pointing out side the golf ball.

Now compare that to probably the most extreme case of a two plane golf swing, and that is Jim Furyk. Look where the shaft is pointing at the half way point in his backswing. 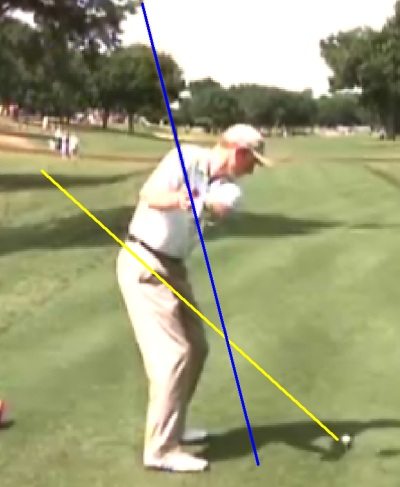 If you compare those two swing planes, is there any wonder amateur golfers are confused about the golf swing plane?! I imagine you’re the same as me, in that you would swap your playing record with either of those two players given the choice! 🙂

So the swing plane is a combination of the movement (arc) of the shoulders, arms, hands and club predominantly. And this is measured and analyzed with straight lines… so it’s 2d. I have seen 3d swing plane software and analysis, but for this swing plane series I’m not even going there!

I hope that’s a simple explanation and everyone is on the same page. If not, don’t worry because over this golf swing plane series, you should hopefully get a much better understanding of it and what you should be trying to do with your swing plane.

I will be giving you examples of each type of player, so hopefully you should find that interesting and informative….as far as the golf swing plane is concerned.