Below I have a swing analysis of Sergio Garcia. It was great to see Sergio win the 2016 Byron Nelson golf tournament. Sergio has been one of the best ball strikers for a very long time now. But the mental side of Sergio’s game has cost him Majors.

I hope that win helps Sergio to make a “major” breakthrough. 🙂 I would like to see that I guess in some part because he’s now the underdog. It’s always good to see someone that the press has written off come good.

Anyway, in the analysis below it’s done as I was reviewing his swing frame by frame, so the surprise at what he does is genuine.

First we’ll start by looking at how Sergio sets up to the golf ball. 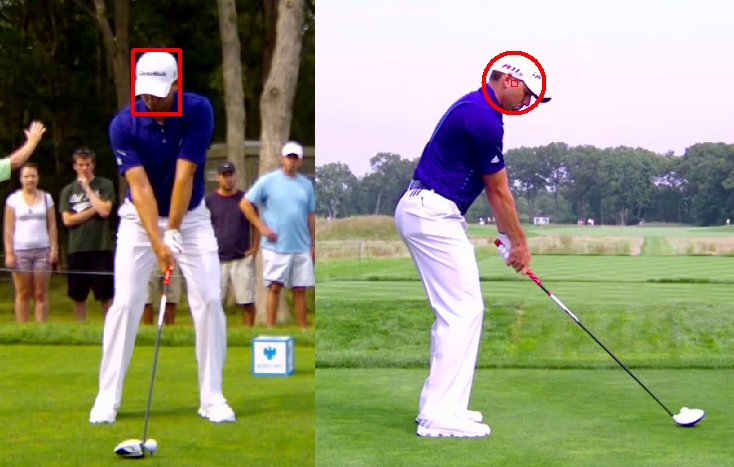 The most obvious thing in Sergio’s setup is how far back in his stance the ball is positioned. Sergio is well known for hitting down with his driver, and a big part of that is where he is positioning the ball. Now hitting down on the ball with the driver will cost you some distance BUT it can be more accurate. Apart from that, the rest of Sergio’s setup is pretty stock standard. Let’s now look at how he takes the club away. 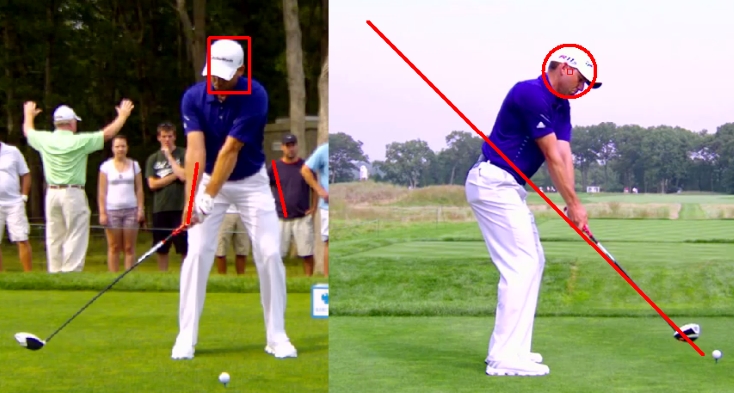 Sergio takes the club away in a pretty standard fashion for a pro. There’s slight hip movement to the right. The club is taken away pretty much on plane. Let’s see how things progress more as the swing continues… 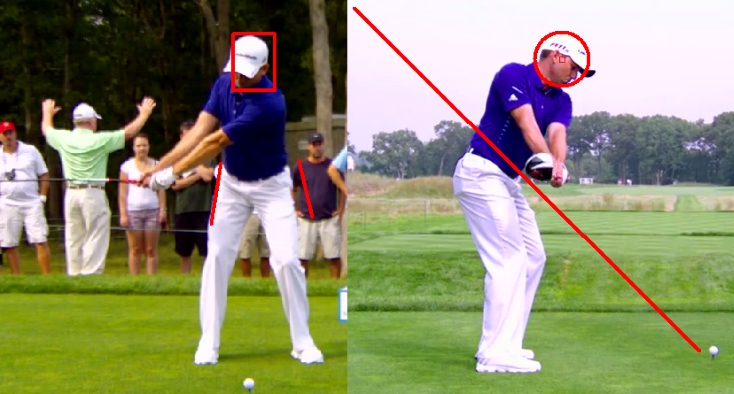 There’s some nice positions there. The club from the down the line view is in a great position. The only thing I notice is his right knee appears to be moving to the right in the face on view. We’ll keep an eye on that. 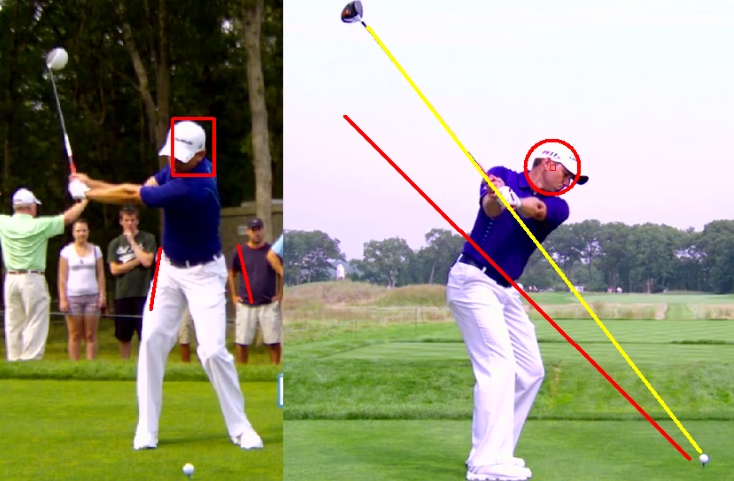 His swing plane is perfect. Just like I teach in the Easy Swing Plane system. Look at the right knee from the face on view though. It looks like it’s moving quite a bit to the right. Apart from that, everything is perfect at this point. Let’s now look at his top of the backswing position… 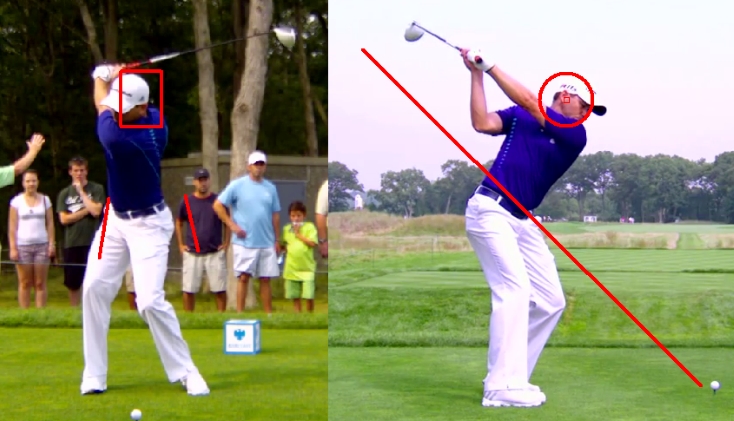 There’s a lot going on from the half-way point in his swing to the top of his swing. He moves his weight to the right side quite a bit during that period. And you can see this by looking at his right foot. It appears his weight is on the outside of his right foot, which is meant to be a big no no. Strangely his right knee has gone to the right quite a bit during the backswing also. Here is a picture of this from the setup position to the top of the backswing. 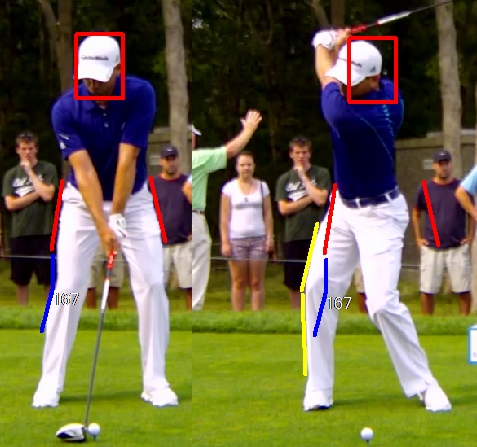 That’s very odd. I’ve ever seen any top pro do that before.

Anyway, notice how laid off the club is at the top of the backswing and how much short of parallel it is. But Sergio does have a big shoulder turn.

Ok, let’s see how he transitions the club into the downswing. 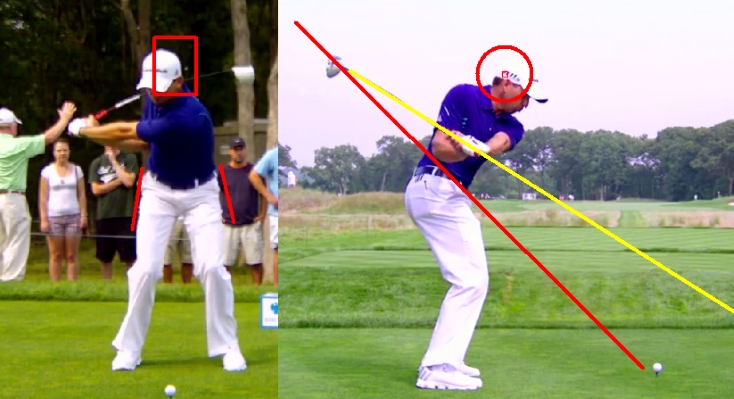 Sergio flattens the shaft in the transition more than most pros. BUT it’s probably not as much as people think because he starts his downswing from such a laid off position. Also it appears as though he has a lot of lag in his swing, but he doesn’t because the club is so flat. Let’s now see what he does later in the downswing… 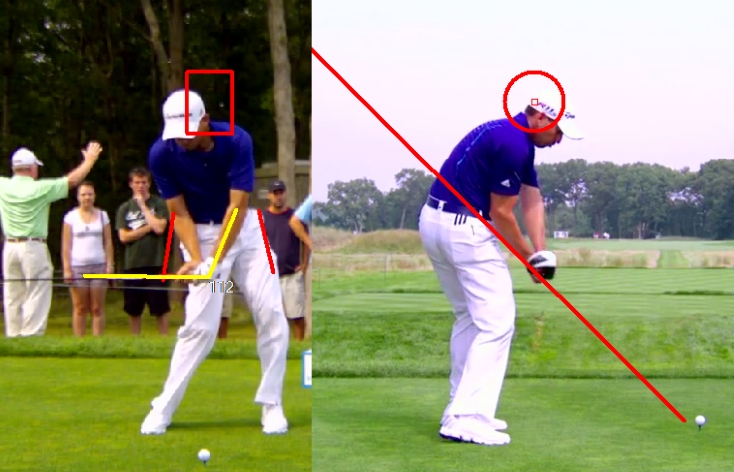 At this point in his downswing Sergio does not have an excessive amount of lag. His head is quite a bit to the right of where it was at setup and down lower, which is fine. My guess is that as he swings through the ball he’s going to keep his head back to try to counteract having the ball placed so far back in his stance.


But when you look down the line you can see that he is bringing the club down perfectly on plane. All right, let’s now look at impact… 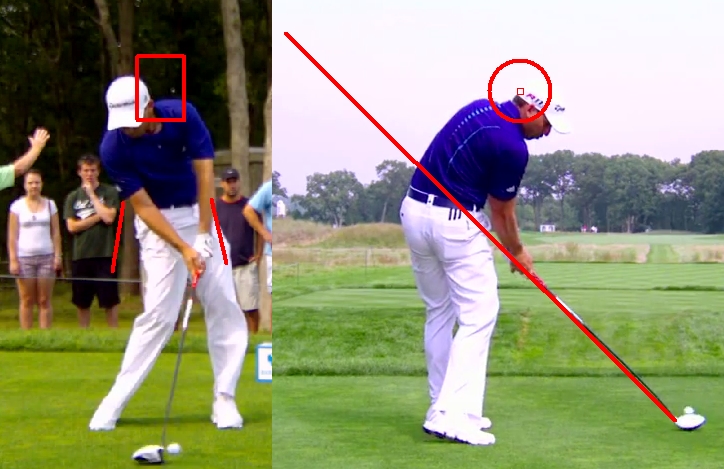 As I thought would happen, the head is going back at impact. But look at the shaft plane at impact. It’s right on the same plane it was at setup. That’s very impressive! It’s a great impact position and it just shows you that you can do some odd things in your swing (e.g weight on the outside of the right foot, right knee moved to the right etc.) and still hit the ball great IF your swing plane is correct. 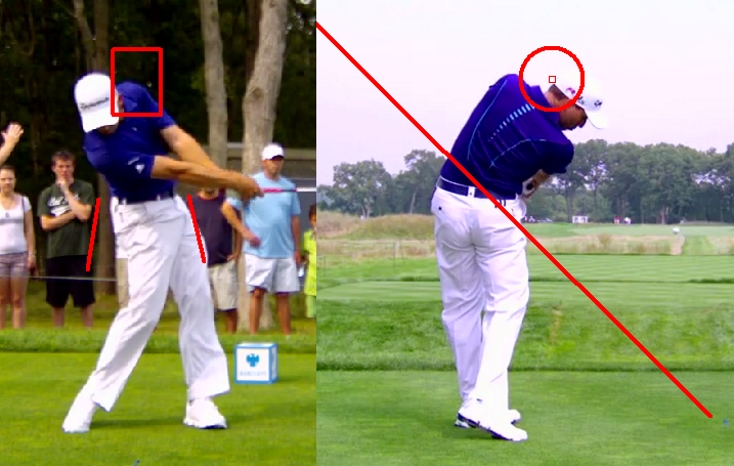 He has a lot of weight on his right side still and his head is still a long way back. 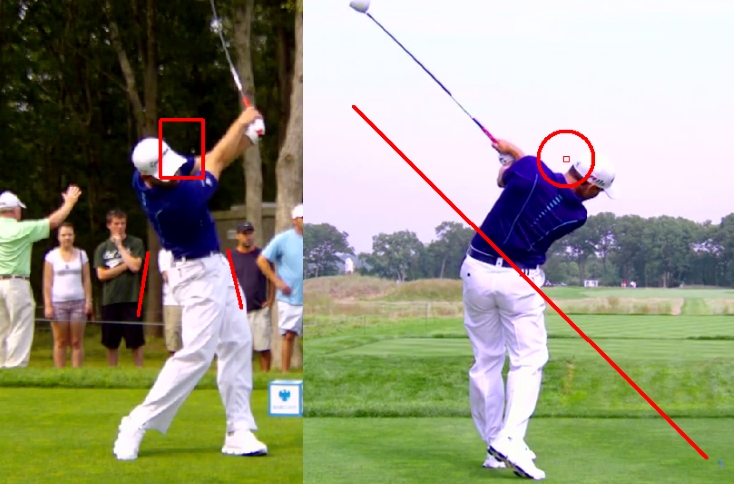 Sergio still has a lot of weight back and his head is still not back to where it was at setup. 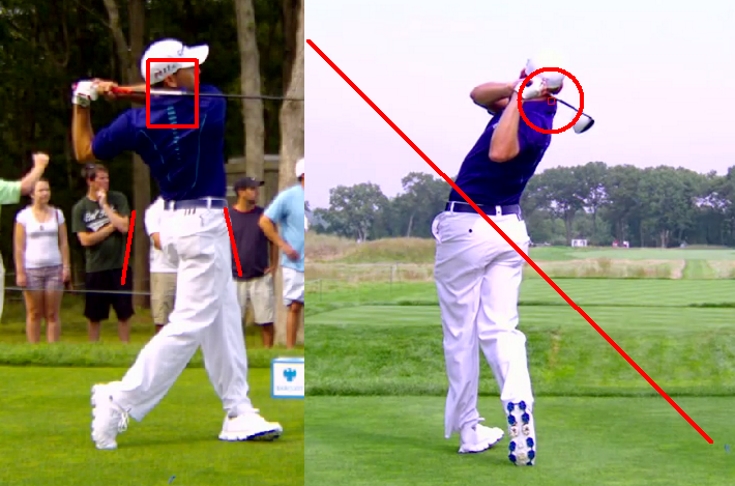 In summary, Sergio Garcia shows that if your swing plane is good then other parts of your golf swing don’t need to be.