There is a bit of controversy between the Golf Channel’s analyst Brandel Chamblee and Rory McIlroy. Here is what Brandel said that upset Rory a little bit…

“The only thing that gives me concern about Rory, is the pounding that he puts on his body in the gym. I say it with a lot of trepidation, because it’s a different era for sure, and I don’t know the full extent of what he’s doing, but when I see the things he’s doing in the gym, I think of what happened to Tiger Woods. And I think more than anything of what Tiger Woods did early in his career with his game was just an example of how good a human being can be, what he did towards the middle and end of his career is an example to be wary of. That’s just my opinion. And it does give me a little concern when I see the extensive weightlifting that Rory is doing in the gym. Thus far, there’s been no signs that it’s adversely affected his game.”

Rory obviously heard about this because he tweeted a video of him doing some squats and pointing his tweet towards the Golf Channel and Brandel: 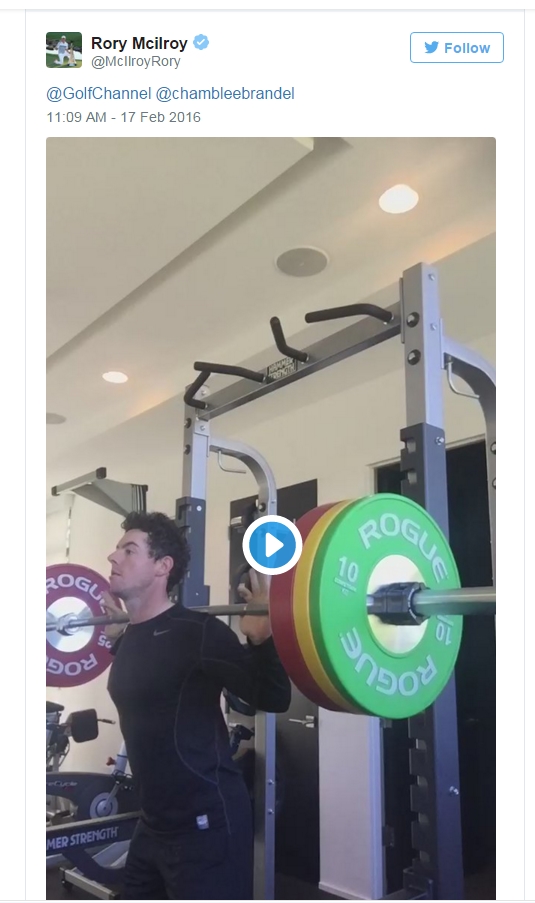 Then Rory Tweets this about the heavy squats in the video:

Brandel got quite a lot of comments about what he said, and there’s generally two sides to them, which were…

1. You’rd old Chamblee, golf has changed and you don’t know what you’re talking about.

2. You’re right Chamblee, Tiger killed himself and is now paying the price, Rory’s got to be careful.

I then watched a golf channel interview with Brandel about his “opinion” and a couple of important points were raised, which were the following…

Professional golfers (for the majority) have to go to the gym to try to hit the ball as long as possible to compete on the long golf courses nowadays. As a result golfers careers will get shorter and they will get injured more, just like what is happening in other sports.

So really what this argument boils down to is longevity.

Are the days gone when you’re going to have guys competing in their 40’s?

Are the young, big hitters going to be done with golf by 40 like Tiger is?

Well, I believe that some will and some won’t.

You can’t put everyone in a box.

But what you can say is there is a definite push for young golfers to be gym rats so they can hit the ball as far as possible. And if you overdo that and have poor form, are you going to pay the price?

But for some, making a lot of money before 40 and not being able to play golf after that will be enough.

Like Tiger said, anything from now on is gravy.

Sam Snead is the poster child for longevity in the game of golf.

Tiger Woods is the new poster child for short and sharp success in the game of golf.

But here’s something interesting about Tiger Woods that Brandel Chamblee said recently. 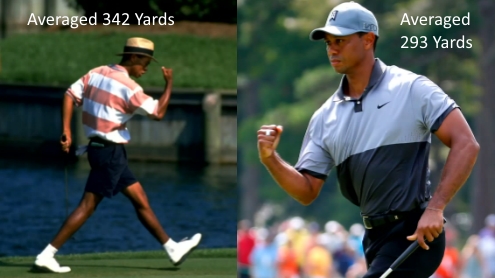 In my opinion, Brandel is right to question what Rory is doing because of the big change in physique. Look at that picture above of Tiger Woods “before” and “after”.

Rory says a lot of the things he does is to protect his back. But do you need to squat 265 pounds to protect your back?

Seems a bit counterintuitive to me.

Anyway, there’s one thing you can’t deny. Professional golfers are swinging faster than ever. That’s why the ball is going further.

Posted in Golf Fitness and Health