In this blog post I’ve got an interesting golf swing review of 22 year old Bryson DeChambeau, who was a Physics Major at SMU.

Bryson has received a lot of publicity since he just turned pro. But you may not be aware of who he is or why he’s getting so much attention. So let me give you a bit of background on Bryson.

In 2015 Bryson became just the fifth golfer in history to win both the NCAA Division 1 championship and the U.S. Amateur in the same year. The other golfers to achieve that are Jack Nicklaus, Phil Mickelson, Tiger Woods and Ryan Moore.

Yes, all of his irons are 37.5 inches long. His wood lengths are different however. Here are the specs of his golf clubs:

So aside from his driver and 3 wood all of his irons are the same length, same lie angle and same weight. A single length set of irons.

This should be interesting!  So let’s now look at Bryson’s golf swing.

First of all I’m going to look at Bryson’s swing when he’s using an iron. And because all of his irons are the same length it doesn’t matter which iron I’m looking at. Anyway, here’s Bryson’s setup from the face on view and down the line… 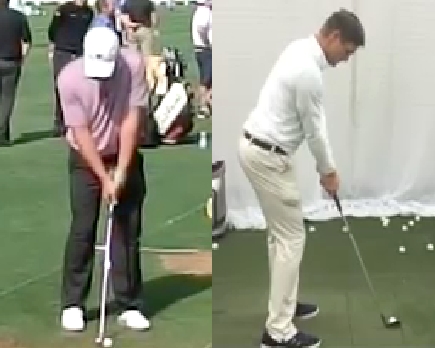 From the face on view his stance looks very narrow and his left hand grip looks very weak. I have heard him talk about holding the club in the lifeline of his left hand, which is amazing how he can get any distance doing that.

From the down the line view the most obvious difference to a normal golf swing is how high his hands are. But remember, the lie angle is 73 degrees. The average lie angle on a 7 iron is 63 degrees so Bryson’s irons are 10 degrees more upright than standard!

I have no idea how he came up with having his clubs 73 degrees upright.  I would like to know however, so send me an email if you know the reasoning behind that.

I  know that Bryson likes to keep his head perfectly still in the swing until the ball is hit. So I’ll mark on the analysis his starting head position to see how much he moves his head, if at all. Also, I will mark the starting line of his original shaft plane, which is going through his upper back. Here’s a picture of that. 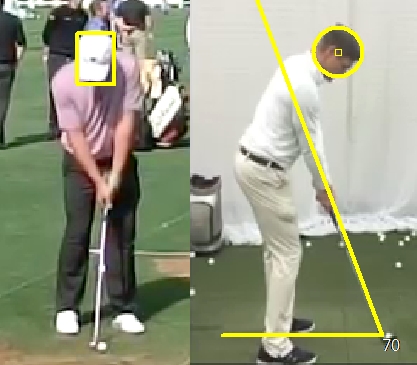 Alright, let’s now see what he does in his backswing. 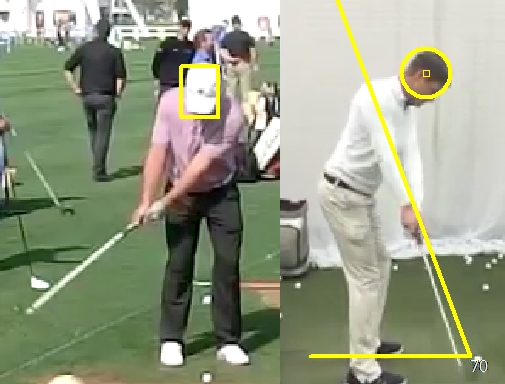 From the face on view you can see that he has hardly any wrist cock. From the down the line view the club has moved slightly inside the original plane line. Let’s see what happens from now on. 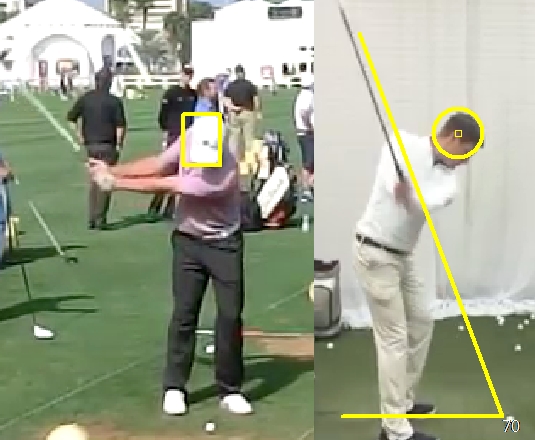 In the down the line view he has a perfect on plane backswing half way into his backswing. From the face on view you can see that he has hardly any wrist cock. Also, his head has moved slightly towards the target. At this point in his backswing you would say that his swing is very wide and on the original shaft plane. 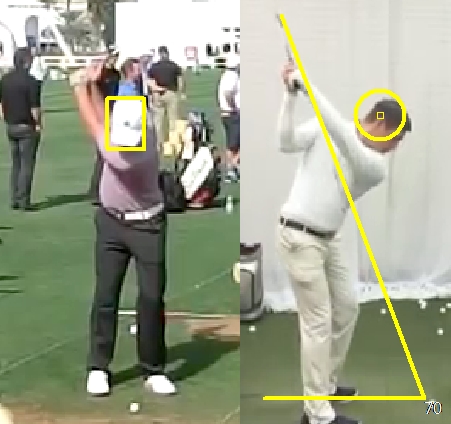 Wow, how on plane is that at the top of the backswing!

I have never seen a golfer like this, ever! 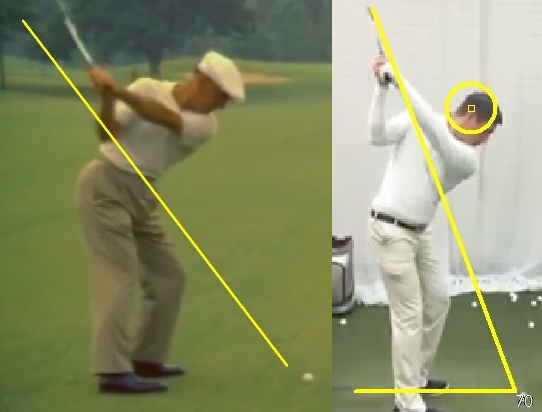 A lot of that difference however I think comes down to the lie angle of the irons. Hogan’s irons were very standard in terms of lie. Whereas Bryson’s are very, very upright. Let’s now look at Bryson half-way into his downswing… 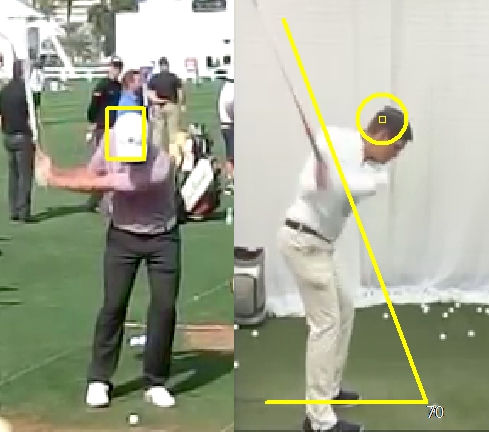 Half way into his downswing the club’s plane is very close to what it was going back. Also, from the face on view the club has a bit more lag than it did going back, but it’s not a lot. 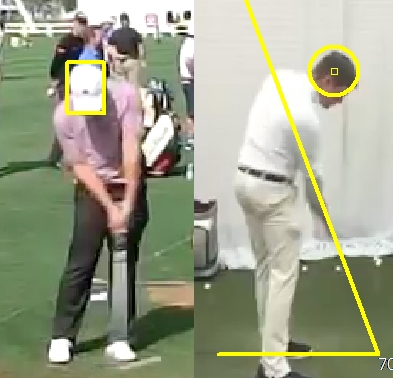 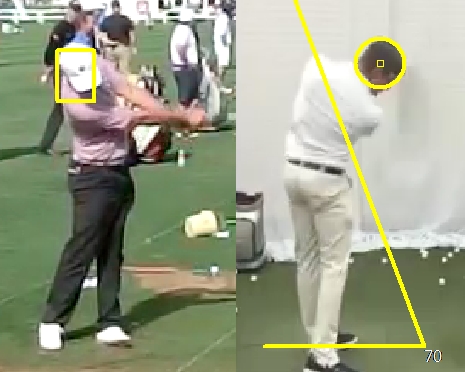 Bryson keeps his right foot on the ground quite a long time into his follow-through. And he has a very wide follow-through at this point in his golf swing. 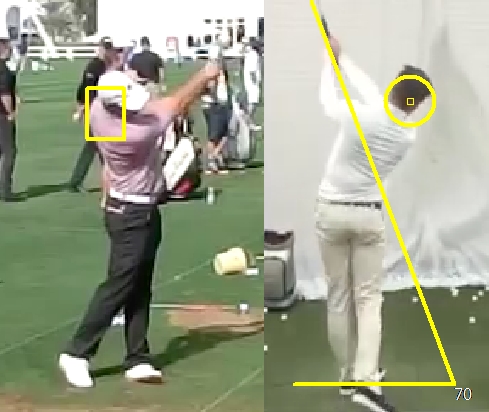 Look how he gets the club shaft back onto the original shaft plane line. I’ve never seen a golfer do that before, which is pretty cool. 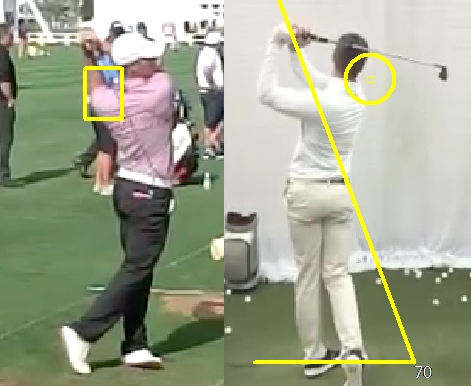 Bryson gets into a nice finish position. The one thing I notice is his right toe is in a funny spot. Not that it really matters but I thought I would mention it.

Ok, so that’s his iron swing. I love the concept of having an upright single plane golf swing. And it makes sense to me to also have single length irons. But let’s see how this converts to his driver swing with a pretty standard length driver (45 inches). 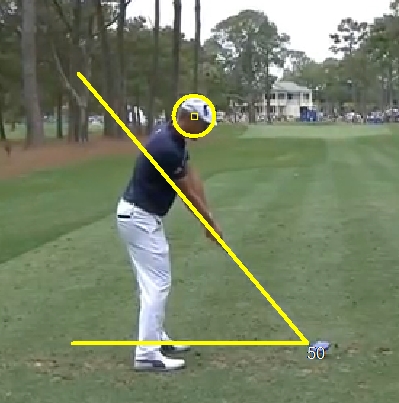 As you can see, the club lie angle is a lot flatter than it was with the iron. 20 degrees flatter in fact. 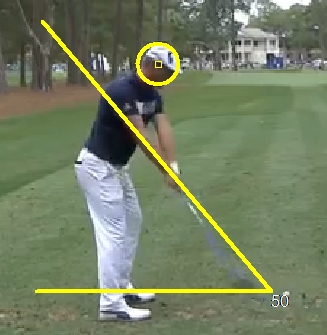 He is taking the club away very close to the original plane line. Let’s see if that continues. 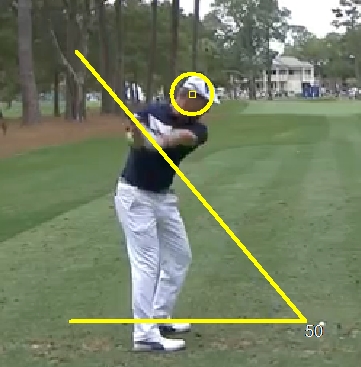 At this point in his swing the club shaft is right on the original shaft plane line. 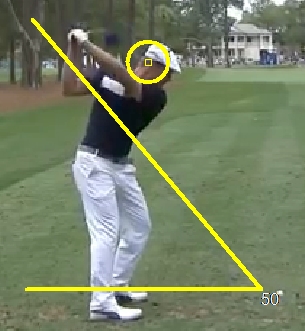 At the top of his backswing his club is now above the plane line. So that’s a change from his iron swing. 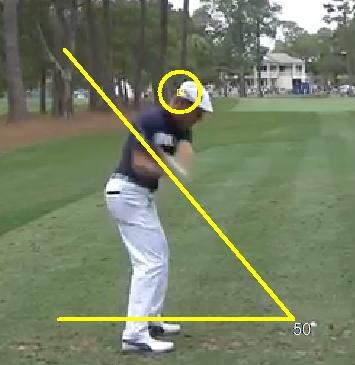 At the half-way point in his downswing you can see the club shaft is right on the same plane line again. 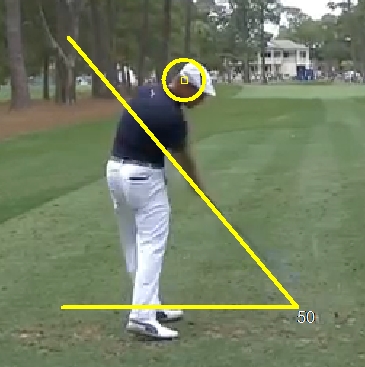 His club is right on the original plane line at impact. 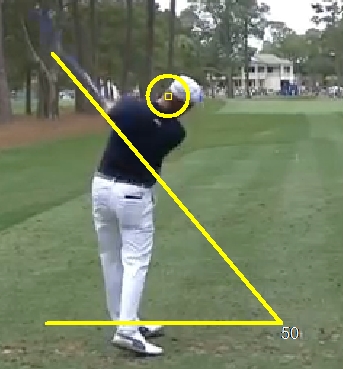 He gets the shaft back onto the original shaft plane line nicely. 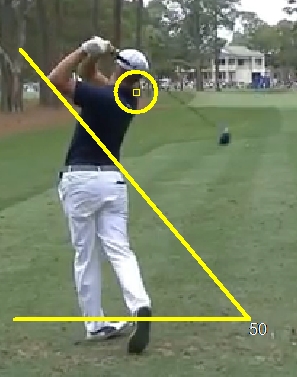 Bryson gets into a great finish position.

To sum up Bryson’s golf swing I would say that it’s the most one plane golf swing I’ve ever seen. And I love the idea of the single length irons. I love how he is swinging on one plane on an upright plane and has his clubs very upright.

It seems a simple golf swing and I really hope that he succeeds and makes it on the PGA Tour. If he does, I believe one of the big OEM companies will come out and mass produce single length irons.  Probably Cobra as Bryson is with them and they have already built single length irons for him.

But I have heard that Ping are looking at doing it.

Having said that, there are single length irons already out now that you can start using straight away. And I’m reviewing one of the newest single length iron sets, called Sterling. These golf clubs are the result of a collaboration between Jaacob Bowden and Tom Wishon.


Look out for that review coming soon.