There’s a popular misconception among average golfers, that if you gain distance you’ll be less accurate. I’m not sure where that misconception came from – BUT it’s wrong!

…there’s nothing in that group that will make you less accurate.

For example, if you increase the lag in your downswing you’ll probably become more accurate as well as longer.

If you gain swing speed, you’ll probably be more accurate because the club will be accelerating more through the ball better.

If you get stronger, more flexible and faster, you’ll be able to control the club better as you’re swinging. And if you get equipment to suit your golf swing, you’ll have more confidence to go after the ball. All and all, you have nothing to fear in trying to add more yards to your drives. And when you do, you’ll probably see that the distance you add is more accurate. Plus, here’s another factor that a lot of golfers don’t consider when trying to add distance to their drives.

The more distance you add, the shorter club you’ll have into holes. And the shorter the club, the closer you will get the ball to the target, e.g. instead of a 6-iron you have a 9-iron. But whenever you’re trying to add distance to your shots, you’ve always got to be looking at the ball flight to ascertain what’s going on.

Tough problem to have, right? 😉

Now as far as accuracy is concerned, it really comes down to what the clubface is doing at impact. Because although the accuracy of your shots is determined mainly by path and face angle at impact, the face angle is the most important factor. Where your clubface is pointing at impact accounts for 80-85% of the direction. So to help you hit your golf shots with a square clubface while hitting them longer, I’m going to give you a great drill that you’ve probably never seen before.

To do this drill, you’ll need to get a box that has three golf balls in it like this… 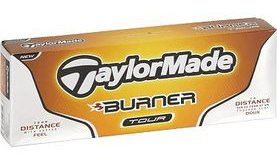 Then take two golf balls out of the box so just one golf ball is left. Then I want you to position this box directly at your target and make sure the ball is at the end where you’re going to strike the box. I suggest you do this with a 5-iron. Now the great thing about doing this drill, is that it’s going to force you to really accelerate through the ball. Plus, it’s going to help you to square the clubface up, because you’re going to be hitting into a square edge rather than the round ball.

So smack the crap… ah… ball rather, out of the box!

The only problem with doing this drill is that after just one shot you’re going to kill the box. So you need to find a good supply of 3 ball golf boxes to do this. Here’s an idea… heard of dumpster diving? 🙂

Jokes aside, this is a great way to combine training yourself to hit it longer and straighter. And if you can find a good supply of 3 ball golf boxes, do it regularly for longer and straighter drives. Now if you enjoyed that drill, you’ll love my NEW complete program designed to help you add at least 21 yards to your drives in 21 days or less. To find out more about that go here now.