Do you want to break 80 when playing a game of golf?

Well, erase all doubt about it!

ACT AS IF you are already able to break 80 and have even done it before! Go on about your life pretending to yourself that you are a 70’s shooter and just keep forging ahead. And then actually accomplishing it in reality is nothing more than just a matter of time dependent on the effort you put forth.

Remember incrementalism and the POW’s? It works, it has to as your unconscious, once it accepts an idea, cannot remain in denial with what it has accepted and must get you in sync with that belief.

You have to see yourself as a great golfer, see and feel yourself as a 5 or 9 handicap golfer. Repeat it to yourself regularly, think it, live it, act as if it’s completely true. We can all act right? You’ve done it before in many social situations. Act as if you hit great shots all the time, pretend if you have to – it still has the same effect on the unconscious. The best tool we have in our arsenal to help with this belief system that we need to have is thinking about and remembering the great shots we have already had in the past! Your unconscious KNOWS it has hit great shots before and so it will have no problem accepting that you can do it again and again.

What will it take for you to really believe in yourself?

So the next time you have a great shot, implant it in your mind as a vivid picture memory. Set it down in stone in a piece of your mind that you can easily get to later. Repeat it over and over to yourself as a video.

Make a big deal to yourself and celebrate it!

Say, YEAH baby that is me all day every day, that’s how I play golf. You’ll want to have a storage of these movies that you can go to at any time of a great shot for each club in your bag. At least one that is a clear detailed memory but more is even better.

You think I ‘m getting away from what the top pro golfers teach? Well how about this quote from Hale Irwin, the greatest senior golfer in history so far. And still winning tournaments in his 60’s when everyone says you are supposed to be over the hill.

This from his book Smart Golf “So many golfers get themselves into a position to improve and then never come through because they subscribe to this self-defeating prophecy that they belong at a certain skill level.”

Still not convinced? How about this one: Have you ever heard of Roger Bannister from England?

For centuries, human beings could not run faster than 4 minutes in a mile. Doctors and scientists studied this for years and proclaimed that the human body was not capable of doing it. Then, in 1954, Bannister did it!

He was able to create a belief system that it was possible or maybe he just never heard that he couldn’t do it. Kids also do amazing things like this because they just don’t know something can’t be done! And after Bannister did it, Australian John Landy did it 6 weeks later. Over the next couple years, many more did it including teenagers! And now today, the record is 3 min 43 sec by Italian Hicham El Guerrouj.

When Bannister was asked to explain that first four-minute mile he answered:

“It’s the ability to take more out of yourself than you’ve got.'”

Why couldn’t those people have broken 4 minutes before Bannister did it? The fact is they could except for their belief system, that was all that was preventing them. Did you know that before railroad travel it was believed that our bodies would explode if we went over 35 miles per hour which is about 56 Kilometers per hour. Those who first rode the rails were considered daredevils! And what about the speed of sound?

It was also believed to be impossible to break the sound barrier except that Chuck Yeager did it in 1947 and now we as humans travel in multiples of the speed of sound. Geez are there really any limits at all to what us humans can do?

Every time anyone says you can’t do something, someone ends up doing it all throughout history.

Whether you say you can do something or you can’t, you’re right because our beliefs are choices that we can change just like clothes. Doing this is so easy, so quick, so time efficient for our golf game here, it takes no time at all out of your life. Just do it, and do it now. Just change your belief system.

Stop reading this and say it out loud to yourself right now, what you believe you can achieve with your golf game. There is a catch to all of this. And that is you CAN NOT backslide. You can’t say to yourself that you’re a 70’s golfer for a time and then one day give up on the idea and then later get back to reaffirming your belief that you’re a 70’s golfer. It will be like starting all over and you will lose your momentum as your unconscious mind will get confused and not accept this new belief because it thinks you are just having your usual wishy washy thoughts fly around your brain like you do for other things that it doesn’t have to pay attention to. It knows you and how you’ve been all these years. You must be serious about what you want and then it will also get serious about making it happen! 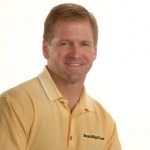