When you make a chipping swing the arms are the only part of the body that should move. (See Chipping Backswing Pictures #14-16)

Now it’s important that you know that during the backswing the right shoulder tilts up (See Chipping Picture #16 Above) because of the address position. The right shoulder does not turn, it tilts up and the arms swing independent of your body. You are trying to develop a repeatable swing that will create consistent impact and distance control.

The chipping motion is such a small, delicate one you need to stay very still and quiet wth your body just like you would when you putt.

Swinging the arms will generate enough power to send a chip shot as far as you desire and on that note let’s look at your chipping backswing length.

To make your chipping as consistent as possible it’s important you learn one backswing lenght and let the club selection control the distance.

The position you should stop your backswing at when chipping is the 8 o’clock position. (See Chipping Picture #18 Below)

At the address position the golf club is at 6 o’clock. As the clubhead starts back the clubhead passes thru 7 o’clock and it arrives at 8 o’clock to begin to swing back down.

Because all you’re trying to do is get the golf ball to have enough air time to carry the fringe and then it will run across the green towards the hole like a putt.

If your clubhead reaches 9 o’clock in the backswing the golf ball will have too much power behind it. (See Picture #19 Below)

Backswing Too Long For Chipping

The two most common mistaks golfers make when chipping is making backswing that is too short or a backswing that is too long. If the golfer takes the backswing only to 7 o’clock there won’t be enough power in the swing to get the ball to the hole and this will cause you to scoop the golf ball. (See Chipping Picture #20 Below)

If the clubhead passes the 8 o’clock position this will cause you to strike the golf ball too hard or slow the clubhead down at impact which often causes fat chip shots. (See Chipping Picture #21 Below)

Now that you know exactly where to stop the golf club at the top of the backswing when chipping next we’re going to look at the chipping downswing. 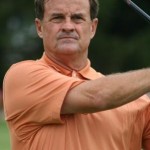 About The Author: This article was written by golf professional Bobby Eldridge. Bobby has been teaching golf for over 35 years and over that time he has given over 40,000 golf lessons. Bobby has produced a great Short Game DVD that shows you in simple terms how you can up and down it from anywhere inside 100 yards. So to improve your short game so you can become a short game magician and up and down it from anywhere simply click here to find out more about the Short Game DVD.