Back Injuries and Golf: How To Reduce Your Risk

There’s one thing all my golfing patients have in common – they wish they had done something to protect their back.

There are 30 million active golfers in the USA alone, 40% of which get injured each year – that’s a lot of bad backs.

The lumbar spine (lower back) is the most common site of injury for golfers. This is because the spine is subject to four types of forces, each of which alone can cause injury. All of them are present during the golf swing.

Addressing the golf ball creates a flexion (forward bend) force, both increasing the pressure in your intervertebral discs and causing the spinal ligaments to stretch, and lose their elasticity. It also adds shear (front to back force on your discs when leaning forward) causing them to slide over one another, as well as a compressive force – wearing and flattening the discs. The backswing component adds rotational force, squeezing the discs and degenerating their outer layers, plus a side-bend force. The downswing and follow-through produce the same forces in the opposite direction, plus extension (backward bend) to finish.

The repetition of these actions during an average round of golf (roughly 40 full swings per round for a single figure handicap, doubled if adding just one practice swing per stroke) put an enormous amount of stress and wear on your spine.

The good news is these forces can easily be counteracted. Developing the strength and endurance of the muscles that surround the spine (the core) in order to stabilize the back, considerably reduces the risk of injury when playing golf.

These core muscles run the length of the torso. When they contract, they stabilize the spine, creating a solid structure for both support and locomotion. A strong core will divert those detrimental forces away from the weaker spinal structures and direct them to the muscles.

The endurance of these muscles is the other element to consider. It is no use having very strong muscles that tire very quickly (especially when you’re after that 300 yard drive down the eighteenth!).

Improving both the strength and endurance of the core can be done through three quick and easy exercises – the Front Plank, Side Plank and One Leg Bridge. 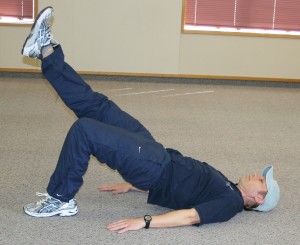 The trick with these exercises is to engage the muscles that you’re trying to build. So squeeze your gluteal (butt) muscles together and contract your abs as you perform each exercise. Start with performing each exercise three times, holding for as long as you can without sagging or shaking. You’re doing well if over the weeks you can build up to two minute holds, three times per exercise.

So use these exercises to keep you fitter, stronger and on the golf course for longer. There’s a bonus to building your core – as it forms the power for your swing, you may also end up adding yards to your golf drive!

This article was written by Alex Gairdner who is a sports scientist originally from England, but now living in New Zealand. Alex is a keen golfer who has created a specialised fitness program to help golfers hit the ball further. This program has helped golfers all around the world to hit the ball further and now it’s your turn. To find out more about this program visit: www.GolfSwingSpeedChallenge.com

Posted in Golf Fitness and Health