Where To Position The Ball For A ‘Pro’ Push-Draw

Are you struggling to hit consistent draws… or hit a draw at all?

If you answered yes, that’s not surprising. And truth is… it’s not your fault.

For well over a hundred years now, golfers have been subjected to all kinds of bad golf tips from golf magazines, golf pros and well-meaning golfing friends.

Some of that advice is just plain nonsense!

Take the classic one for example… “you need to position the ball up in your stance to allow the club time to release”.

Ok, so let’s say you have the ball positioned up in your stance… say off your left toe, to allow yourself time to release the club head.

Now the perfect place to position the ball for all golf shots (apart from the driver) is down from the left ear like this: 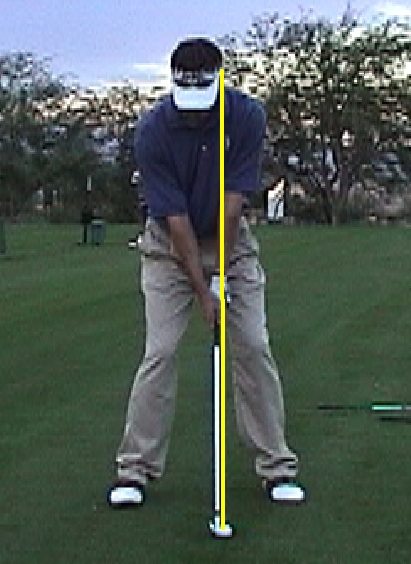 So that’s a great place to position the ball. The club is going to be approaching the ball on a path traveling towards the target.

But if the ball is positioned up towards the left toe, then the club’s path will naturally be going to the inside, so the ball will start to the left.

A pull hook is the worst shot in all of golf!

If you’re after more distance then the shot you should be trying to play is a push-draw. That is one of the prettiest shots you can ever hit.

If you can hit consistent push-draws your playing partners will be in awe.

When you’re playing a push-draw you would aim about 5 yards to the right of the pin, and hit the ball expecting it to curve from right to left 5-10 yards.

When you can hit the ball with sidespin like that, then you can control and maneuver your ball to intelligently get around the course. This is because before any shot you’ll be able to know which way the ball is going to curve.

That’s what all the great players do. They have a stock shot that they hit most of the time.

And if you lack distance, your stock shot should be a push-draw.

Last week I released a 17 day program to help you hit consistent draws like what I’m describing. I strongly suggest if you want to do this you go here to get that program now.