Golf Tip – What Should The Feet Be Doing At Impact In The Golf Swing?

I have a question about my wife’s swing, that nobody has ever been able to solve. At impact, she lifts both heels and she cannot prevent herself to do so. But when she does a practice swing, without a ball to hit, her front heel stays perfectly on the ground.

I have seen many golfers over the years have both heels off the ground at impact. For example, I’ve seen Tiger Woods, Jamie Sadlowski (one of the longest drivers in the world) and Laura Davies do this (see proof below), just to name three. 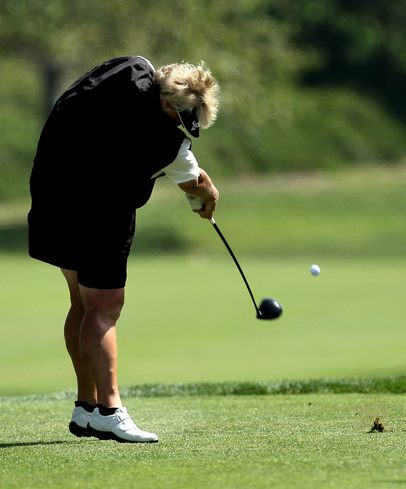 Having both heels off the ground at impact has no direct relationship with what happens between the clubface and ball.

I would never teach anyone to do this, but if someone came to me doing this I wouldn’t try to stop them doing it. I would just put it down to a quirk. Another good example of a swing quirk is at impact Fred Couples’ right hand grip is almost off the club. Here’s what he says about that:

“When I reach impact, my right hand feels like it’s almost off the club, which gives me a more powerful hit through the ball than if I was “choking” the grip. I wouldn’t necessarily teach anyone to do that, but it’s the right kind of feel.”

Also, when you see pictures of Vijay Singh at impact you can see that his right hand is almost off the grip like this… 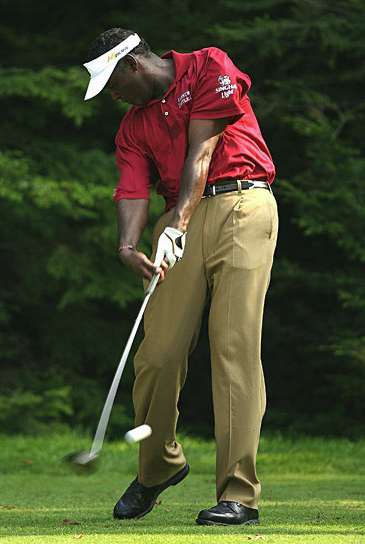 Again, you’re never going to teach someone to do that. So it’s a quirk. And it’s a quirk that has no direct result on what happens between the golf club and ball at impact.

So what I’m trying to say is….don’t worry about it!