There’s a lot of talk about the release of Hank Haney’s new book ‘The Big Miss’ that’s coming out on the 27th of March.

Are you going to get it, or just ignore it?

I’ll be getting it and doing a review on it in due course. Fortunately for me it’s a business expense, so if you don’t know whether it will be worth the money just wait for my review and I’ll let you know.

And on the subject of reviews, I’ve got a new one today on the book called The Talent Code. It was an interesting read and I hope you find the review helpful.

Now let’s get into helping your golf game…

If you’re playing a course you know well then you should have a general plan/strategy for each hole. Your general plan/strategy should take into account your ability to hit shots, because if you are planning to hit a shot that you’re not confident about this will translate into a tentative stroke. And tentative strokes NEVER produce good golf shots.

So when you’re planning your strategy on a hole you should figure out the easiest and safest route to the hole. And when considering what approach you’re going to take for a tee shot and for the hole, you need to think about the risks on each hole. For example, here is a good guide as to the weighting of potential risks, in order:

For example, the wind may be blowing a certain way, making a certain shot you’ve planned very hard to execute. Or you may be hitting your driver extremely well, and you feel confident on a particular hole to hit a driver where you’ve planned to hit an iron off the tee.

So have a general strategy for each hole, e.g. you’re going to play conservatively off a tee by taking an iron etc. but realize that you’re free to change that strategy as you’re playing.

It’s better to have a plan/strategy which you change than it is to have no plan or strategy.

Below is an example of how golfers of different abilities may plan to play a hole. So look at this to get an idea on how you should plan to play each of the holes on your home course. And then go through each hole that you’re going to play and plot your way around the course in the safest and easiest way possible, given your current playing ability. 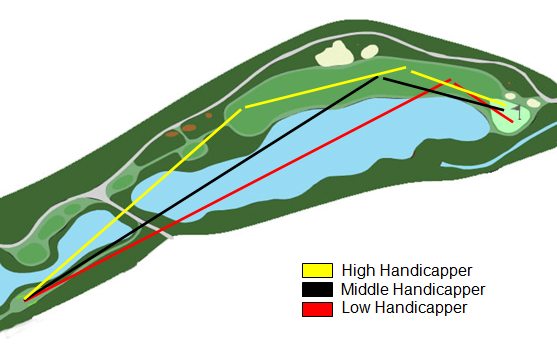 In that example hole above, it shows a good example of how you can plan out your strategy on a hole, but on the day your plan may have to change. For example, the line the low handicapper has chosen would probably account for no wind or downwind if that’s the predominant direction of the wind. But if there is a strong head wind, they will then have to change their plan and choose the middle handicapper route or even a line more conservative than that. So planning is important, but you do have to be flexible.

If you do this general planning, you’ll find you’ll save a lot of shots over the duration of a year.

I have trouble releasing the club through impact which often results in a slice. Can you give me a drill that will teach me how to release??

No problem. Here’s a drill that is really simple, yet very effective at teaching golfers how to release the club through the ball.

To do this drill on the driving range, get out your 5 iron and setup to a ball as you normally would. But before you make your swing move your right foot back away from the ball, so you’re forming a very closed stance.

And when you do this you must have a very closed stance for it to be effective, so over exaggerate if anything.

Once you’re setup like this then swing as you normally would, BUT make sure that your right foot stays on the ground in the same place throughout the entire swing. To help you do this imagine your feet are in cement and can’t move.

By doing this you’ll be forced to use your arms and hands to release the clubface through the ball.

So keep doing this drill over and over again and then when you swing normally (with your feet parallel to your target line), you should have the same feeling of releasing your hands through impact.

There’s many more things you can do like this drill that will help you to hit a powerful draw, and in this system I created I give them all to you. So go here to get that and fix your slice once and for all. 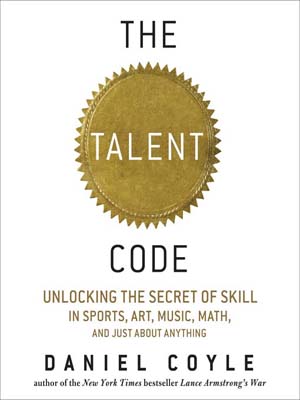 This book is not directly a “golf improvement book”, but it relates very well to golf in what it covers because golf is a great “skill” sport. And it was interesting reading this book to see if the concepts raised can be applied to how we can improve our golf games.

Having said that, the game of golf is mentioned quite a bit (along with Tiger Woods) in this book. The author talks about the hotbed of golfing talent coming from places like South Korea. Here’s an excerpt about that…

“The first South Korean woman golfer won a Ladies Professional Golf Association (LPGA) tournament in 1998; now there are forty-five on the LPGA Tour, including eight of the top twenty money winners.”

So what is this book all about?

Well, it can pretty much be summed up in one word, which is:

What the heck is myelin, I hear you asking?

It’s a substance in your body that apparently is the holy grail of acquiring skill, because when we’re doing a skill our nerve fibers in our brain carry tiny electrical impulses. And myelin wraps around the nerve fibers so that the signal becomes stronger and faster.

Well, the more you do something correctly the more myelin is wrapped around the fiber which gives us more skill and speed, and it ingrains that skill deeper.

But this also works in reverse too, because…

Now, there is something that can be misleading in this book if you don’t watch out for it, and that’s the 10,000 hour/10 year rule.

When you look at so called ‘super talented’ people, it takes them about 10,000 hours (or about 10 years) to get to a world class level.

Take Tiger Woods for example. He started playing golf before the age of 2 and 10 years later he was pretty damn good for his age. Then you look at Mozart — a so called genius. Well, one researcher estimates that by his sixth birthday, Mozart had studied music for 3,500 hours with his instructor-father.

Now the misleading part is that you just need to spend time practicing something and you’ll become great at it…eventually.

That is simply not true. It wasn’t stated in this book that this is the case, but a lot of people are running with the idea that you just need to do 10,000 hours on something and you’ll be world class.

That’s rubbish, and again, that assertion was not in the book.

What was in this book was a look at the hotbeds of talent and how they practiced. For example, the place in Russia where they are turning out tennis star after tennis star was examined and found they practice something called deep practice.

What is deep practice?

Deep practice is focusing on a small piece and starting off really slowly and making sure you get it right while mucking up. Because it’s through our mistakes and correcting them that we learn. Then once you have one piece correct then you have to challenge yourself and add the next piece and the next piece.

This relates very nicely to the golf swing and improvement, because so often I see golfers wanting to make a change to their swing and just not being able to do it, and they don’t understand why.

For example, I see golfers saying to me they’ve changed their swing radically, and then I look on video and their swings look almost identical.

Why would that happen?

So how can we use myelin to our advantage and improve our golf game?

It’s very simple, you need to start out really slowly with one thing and work on it, and work on it making sure that each time it’s correct. Let’s take the golf grip for example. Everyone knows that the golf grip is a foundation for a great golf swing. I could give you quote after quote from great players backing that up.

But let’s say your grip is not even close to the grip of a great golfer. And I see this all the time with high handicap golfers. So what to do?

Well, in the Talent Code the author talks about the famous basketball coach John Wooden, and how he would teach people using the following principle….

So first you need to find a good explanation of why a good golf grip is important. If you’ve read much in the way of golf improvement advice, I imagine you’ve read a lot of commentary about the golf grip and the effect it has on the golf swing. But just for good measure, here’s what Tiger Woods says about it:

“If your grip is sound, you don’t have to think about your hands at all during the swing. You’re free to concentrate on the other aspects of good ball striking.”

Then you need to see, or read a good demonstration on how to form the golf grip. Here’s a good video for you if you need that.

After watching and reading information about the grip you then imitate what you’ve seen and make adjustments to what you’re doing to get it correct. Once you’ve done this then you need to repeat it over and over and over again, so you build up your myelin to make what you’ve learned automatic and effortless. That can’t happen overnight, because it takes time to build up myelin.

But every time you grip the club and adjust it so it’s correct you’re building up your myelin.

So the reason why golfers find it so hard to make swing changes, is because the myelin has formed already to help you swing the same as what you’re doing. And if you’re not happy about your current swing it’s really your own fault. Sorry, but that’s the truth.

You formed the habitual golf swing that you’ve got now.

The only way to change it is to do the correct actions over and over again so you build new myelin for that action. Having said that, in this system to fix a slice I have a way to make this happen much quicker.

But all in all, this book is a great read and I found it very interesting. I’m just not sure how it fits in with the “find your strengths” movement. I don’t think that everyone can be a superstar at just about anything by doing what is outlined in The Talent Code.

Genetics and talent must play a part in greatness. But that part is probably nowhere what the “average” person thinks, especially in terms of the statements like “they are just a genius”.

It comes back to the old statement of practicing perfectly. I’m going to explore that some more and I hope to help you do that with some of my future golf improvement works.

In the meantime, this book is a great read and one of the big take-aways for me was that if you really want to improve at a skill, then you just need to practice deep. You may not become the best in the world, but with deep practice and hard work you will improve.

I hope you enjoyed this issue of the Consistent Golf Gazette. Bring on ‘The Big Miss’ and The Masters. 🙂