In this issue of the Consistent Golf Gazette I’ve got a great golf improvement article for you, an awesome answer to a common problem one of my students was having, and a new product review.

But before that let me tell you about my first serious game of golf for the year, which I played yesterday.

First, it was great to get out in the fresh air. And I played on a golf course which I haven’t played on in a number of years. I was shocked to discover that I’m hitting the ball way longer than I was when I played this course previously.

The main thing I can attribute that to is my swing speed improvement thanks to the exercises found in the golf swing speed challenge, because the mechanics of my swing and equipment hasn’t changed much since the last time I played this course.

But this time I was hitting par 5’s in two. Having little wedges to long par 4’s and hitting shorter irons into the greens on the par 3’s.

However, the best thing about my game yesterday was not having pain when I was swinging. I used to find that to be a real problem when I played golf. I would limit my swing speed so that I would not hurt myself. But now I just grip it and rip it. 🙂

So I can’t recommend highly enough that you get the golf swing speed challenge and start the program. You won’t believe how much more you’ll enjoy playing golf when you do. Go here to check it out now.

OK, let’s get into this weeks instruction….

A power fade is a great shot to have in the bag, but a slice is a not only a score wrecker but also a distance zapper.

Every time you hit a slice you’re costing yourself a lot of distance. So if that’s your problem I’m going to help you to fix it.

To fix your slice there are 3 things in your swing you need to do.

First, you need to setup the opposite of what you’re doing to hit your slice.

Second, you need to approach the ball on an inside path.

Third, you must contact the ball with a slightly closed clubface.

If you do all of these things you’ll fix your slice – and I guarantee that! 🙂

Why would I guarantee that?

Because all 3 of those things are the opposite of what a golfer does to hit a slice. For example, the setup…

Golfers who hit a slice regularly aim way too far to the left, hoping that by doing this they’ll lessen their slice. Sadly it just makes it worse.

Golfers that slice generally have a weak grip, thinking that somehow this will help them to square the clubface up at impact, but instead it makes it harder.

If you’re not sure what a weak grip is check out pictures of Ben Hogan’s grip. Then compare that grip to John Daly’s grip.

The thing most amateur golfers don’t understand about Ben Hogan is that a lot of the things he did was to stop a hook. The complete opposite problem than most average golfers have.

A lot of amateur golfers pick up a copy of Ben Hogan’s famous “Five Lessons” book and wonder why they slice even worse. Anyway, back to the topic…

Golfers who have a slice normally have the ball positioned too far forward, so the clubface has little chance of contacting the ball from the inside because it’s already moving to the left at impact.

Golfers that slice stand too close to the ball because they’re afraid to have too much space between themselves and the ball in case they slice it!

So if you suffer from a slice problem you need to reverse basically every instinct you’ve got when setting up to the ball.

For example, when you grip the club you should have a strong grip. Think John Daly.

You should align yourself to the right of your target. Woah, how scary will that be!

You need to place the ball back in your stance so you can start the ball to the right of your target.

You need to stand further away from the ball so you have some room for your hands and arms to swing down from the inside.

If you did the opposite of what you do to hit a slice do you know what will happen?

If you really make these changes to your setup that I’m recommending, your ball striking will suck….to start with.

If you make these changes I’m suggesting, you’ll look like an idiot…to start with.

See, the reason most people who have a slice problem will never fix it is because they’re afraid of really making a change, because what if they get worse.

Well, if you want to fix your slice problem you will get worse and it will feel strange. But this will only last for a short time because the more you do it the more natural your new setup will feel.

And after all of this exaggeration do you know what will happen….you will fix your slice and you’ll hit the ball straight.

Then, over time you can go back to a more normal setup.

But to fix your slice you’ll need to take drastic action to do it. You’ll need to look a bit silly on the driving range for a bit.

So if you suffer from a slice problem have you got the balls to do what I’ve just recommended?! (No offense ladies. :-))

I often hit a shank out on the course and it’s killing me. It’s embarrassing and I feel like quitting. I don’t want to quit so can you please give me a solution?

OK, I’m going to give you one strange solution that you may not be game to try. But seen as how you’re desperate you may just do this.

To do this you’re going to need your golf clubs, some golf balls, some eggs (a dozen will do) and a towel.

Once you have everything to hit some balls and your eggs then go to the driving range and get ready to hit a ball with the club you most often shank with.

Before you’re about to hit however place an egg just outside the toe of your club when you’re setup to the ball.

As you can imagine, if you contact the ball with the hosel of your club not only are you going to get a shank but you’ll also get soaked in egg.

If this happens once I can almost guarantee you won’t let it happen again.

So you need to hit shot after shot with an egg just outside the toe of your club.

Then out on the golf course imagine the egg is still in place and I’m sure you’ll find that with time your shanks will be a thing of the past. 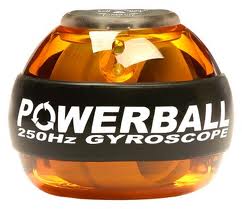 This gyroscope is about the size of a tennis ball. Here’s an overview of what it does, taken from the powerballs.com website:

The NSD Powerball is a hand gyroscope – a tennis ball sized sphere containing a computer balanced flywheel which can revolve freely inside.

As soon as you put the flywheel spinning (by means of subtly rotating your wrist), it begins to generate an extraordinary force (otherwise known as gyroscopic inertia) which acts immediately against your fingers, hand, wrist, arm shoulder and even chest!

The ball weighs less than 300g but can pack a 40lb punch depending on the speed at which the rotor is spinning – the present world record is over 16,000rpm!…can you even come close?? 🙂 and will make even the fittest and strongest people on the planet burn because it is hitting muscles in the fingers, hands, arms, shoulders and chest that you simply won’t have used before with conventional forms of exercise.

OK, so it works the fingers, hands and wrists mainly. Those are pretty important parts of our bodies as golfers, aren’t they?

So I thought I would get this and try it out. And I was very interested to do this, as I read on their website about Karl Woodward who hit a drive over 400 yards and apparently uses this. You can read about that here.

But what got my attention was these statements on that page:

Guaranteed Results – our Promise to you!

In 30 days time you are going to be hitting them further, straighter and with more confidence and authority than ever before.

In 90 days time we’re going to guarantee you up to 50 yards extra on your golf drive, serious distance in your long irons, up to 20mph more speed on your tennis serve and some serious endurance to your mountain biking/sports cycling disciplines.

And we promise that this will come about with just 7-10 minutes of using this unique instrument each session in the way we recommend over those time frames. (The more often you use it each day, the more significant the benefits you’ll accrue)

So after getting a powerball I used it for the suggested 7-10 minutes a day for 90 days.

But I’m sad to report that I did not gain 50 yards. In fact, I don’t think I gained any distance from using this device.

However, it’s not all bad because it is a good workout for your hands and wrists and I do feel like I have more power in these muscles. It just hasn’t translated over to power in the golf swing.

I’m not surprized by that though because the hands and wrists don’t directly apply power to a golf shot. They are there to hold onto the golf club and keep it in place while the club is swinging fast. But as far as directly applying power to the golf ball at impact the hands don’t play much of a role.

So I would be very surprized to hear of any golfer saying they picked up 50 yards as a direct result of using this device.

Something I did like about it though is that it’s a good break from typing on the computer. And I thought it would be a great product for someone that has injuries to the hands, wrists and elbows.

I just wouldn’t recommend anyone gets this device expecting to gain any distance on their drives. It’s just not going to happen.

This is a fun device though. My only criticism as far as its design is concerned is that you have to use a piece of string to start it. I have lost the original string and now I have to try and find something similar if I want to keep using it. Either that or I can try to start it with my thumb. I’ve done that a few times but it’s a pain (both ways!).

Having said that, they do have a press button start model now which is a nice addition.

All in all, it’s just another thing you could get if you’re serious about improving your golf game. I wouldn’t say it’s essential, but if you’ve got a few extra bucks lying around and you feel as though your wrists could use some extra strengthening then give it a go.

Again, don’t expect huge distance gains and don’t use it too much. 7-10 minutes, 3 times a week with this thing is plenty. Also, start out slow and build up speed over time. There’s no point getting an injury trying to make this thing go fast .

OK, that wraps up this issue. I hope you enjoyed it. The next issue will be sent to you next Sunday. Until then, if you want a great, guaranteed way to hit the ball further check this out and have a great week.