Ben Hogan was one of the best ball strikers the world has ever seen.

And when he practiced he would have a person down the driving range ready to collect the ball after it bounced. And that person hardly ever had to move!

You’ve got a 5 iron in your hands and that normally goes 170 yards. You have a person standing 170 yards away and you’re going to hit balls to them. How much do you think that person is going to move to get the balls?

As far as Ben Hogan’s golf swing secret is concerned, there has been a lot of speculation like:

But all of that is just a smoke screen, because Hogan said the secret was in the dirt.

That comment has been labeled as “practice”, which I think is a load of rubbish. Because if the average golfer practices more they will generally either stay the same or get worse. 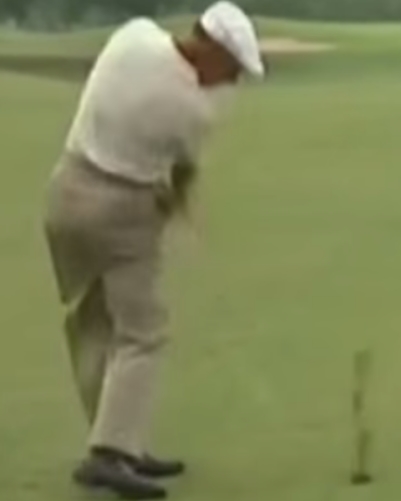 Because they are practicing their bad habits, which is just going to make those habits more ingrained.

But Hogan was right, the secret is in the dirt and that doesn’t mean hours and hours of practice – and here’s why.

Every time Hogan hit a ball with an iron to his caddy he took a divot. That’s what all good players do… hit the ball then the ground.

And to hit a ball the same place over and over again you have to have the same swing path, the same angle of attack, the same clubface alignment, the same contact in the middle of the clubface… at impact.

Hogan never had the luxury of a Trackman or Flightscope to tell him the swing path and clubface alignment at impact. So he figured it out of the dirt.

But I bet if Hogan was on one of those machines in his prime and he was hitting shots directly to the person out in the driving range, the numbers would have been so consistent. And that, my friend, is Ben Hogan’s REAL swing secret.

You don’t have to look far on the PGA Tour to see that swing secret in action. You watch this weekend during the Players Championship. The good ball strikers that week will be swinging with good swing path and good clubface alignment… at impact. And they’ll be doing it consistently.

That’s sums up pretty much all tour players however, because they all hit it good. The difference at the end of the day is normally mental and putting.

And although the PGA Tour players swings of today will often look nothing like Ben Hogan’s, they’ll be able to come close to his great ball striking performances. So what’s the big take-away from all of this for you. It’s simply this…

“get on one of the swing analysis machines and see what your swing path is and clubface alignment numbers are at impact.”

How can you practice swing path and clubface alignment at impact?

Well, swing path is pretty easy. If you’re on the driving range (a real grass one) you can easily see where your divots are pointing. If they are left of your target then you’re swinging out-to-in. If they are right of your target then you’re swinging in-to-out. Ideally you want to err one way or the other. It depends which way you want the ball to curve.

Bruce Lietzke was one of the most consistent ball strikers ever, and he would only ever hit a fade/slice and all of his divots were quite a bit to the left of the target.

Just remember this, the squarer your path at impact the straighter your shots will fly. The big banana balls golfers often hit is a result of a big out-to-in swing path and a clubface open to the swing path. For example, if the golfer has a square clubface at impact but a 10 degree out-to-in swing path the ball is going to start straight at the target and then curve way to the right.

If you have a square swing path and a square clubface the ball is going to go more or less straight (there are other factors involved however, but I won’t go into them in this article).

So if you want to hit pretty straight shots, most of the time you need a swing path that is pretty square at impact. And you can figure this out from your divots. If your divots are way left of your target then experiment with the feeling of your divots being way right of your target. I imagine you’ll find it hard to do that. And if you exaggerate you may get a square swing path some of the time.

That will be valuable for you to do, because you’ll be able to make a change that will have an instant difference on your ball striking.

The next big factor is clubface alignment at impact. This largely controls the starting direction of your golf shots.

For consistency I recommend you pick a starting line that is not directly at your target.

Because it’s almost impossible to have a clubface alignment at impact that is always the same, e.g. square.

The swing path is much more doable. You could have a square swing path most of the time, but not a square clubface.

That’s why good golfers have a stock shot of either a fade or draw.

So if you drew a line from your ball directly to your target, I want you to pick which side of that line you want your ball to start. Then you can practice always starting the ball to the left or right. Here’s how…

Get a golf shaft and a foam swimming noodle. Stick the noodle on top of the golf shaft (it should be about 6 feet high). Then stick the golf shaft and pool noodle in the ground about 15 feet in front of your ball. Then I want you to get out your 5 iron and pick a side that you want your ball to start, and practice hitting balls to that side. It’s a good idea to experiment with sides and find which way you prefer to start the ball.

By doing this you’ll be learning clubface control. And that’s how you control the golf ball.

Let’s say you want to hit a draw. For that to happen the clubface must be open to the target so the ball starts to the right and draws back. If you were on a launch monitor you would want your swing path to be 2-3 degrees in-to-out. And your clubface square or 1 degree open. By doing that the clubface is closed to the path which will mean the ball will start to the right of your target and curl back.

For a fade you would want a swing path of 2-3 degrees out-to-in. And a clubface that is square or 1 degree closed, so the clubface is open to the swing path.

Also, no amount of improving a technical aspect of your swing is ever going to make any difference unless it improves your impact numbers.

In summary, if you want to hit straighter, more consistent shots then you need to improve the consistency of your swing path and clubface alignment at impact. If you do that, you’ll hit much better shots, more often.