How To Add Extra Power To Your Golf Swing

There’s one place in your golf swing that you can improve to add extra distance to your shots. And that place is the transition.

What is the transition?

It’s simply the moment of time in your golf swing when your swing is moving from the backswing to the downswing.

And it’s called the transition because there should not be a stop to your backswing and a start to your downswing. You transition between the two. And in fact, the transition is the START of you finding amazing power in your golf swing that you never thought existed or was even possible!

This amazing power will come with much greater accuracy too when you master the transition.

If I had to name one place in the golf swing (apart from impact) that separates the great ball strikers from the average ones it’s the quality of the transition.

So if you want to become a great ball striker this is one aspect of your golf swing that you’re going to have to really spend some time practicing.

But the pay off for doing this is huge i.e…. Longer and More Accurate Golf Shots!

Now like everything where only a small percentage are successful, the great ball strikers have spent a lot of practice time perfecting their transition from backswing to downswing. And to be completely honest with you, the transition is the hardest move in the golf swing to perfect. The reason for this is obvious.

During your swing, for a brief second your upper body should be completing the backswing while your lower body is starting to move towards the target.

So to complete the transition successfully you should have two main segments of your body (upper and lower) going in different directions. I know that sounds hard….and that’s because it is!

And when you “get it” you’re going to get so much more enjoyment from this game due to the extra distance and accuracy you’ll gain…you’re going to love it! 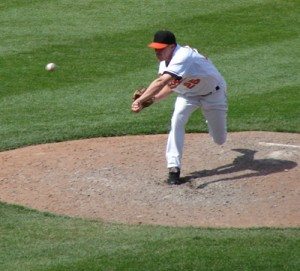 Now if you’ve ever taken part in any other sport that requires kicking (e.g. soccer), throwing (e.g. baseball), hitting (e.g. tennis) you would’ve experienced the transition move that is needed in the golf swing. And one move that almost every one can relate a transition to is the action of throwing a ball.

So if you wanted to throw a golf ball as far as you possibly could down the fairway would you?:

b) keep your weight evenly distributed the entire time you’re throwing the ball.

I hope you picked “A” because that’s what any athlete would do to throw a ball as far and fast as possible. Just take a look at a baseball pitcher for example.

Get out your driver and setup as normal (but without a golf ball). Then swing to the top of your backswing and stop. While you’re stopped bring your front foot back so it’s together with your back foot. Then to start the downswing simply move your front foot back to the position where it was at address and swing down and follow-through.

By doing that you’ll quickly learn how the transition into the downswing should start with your lower body.

But once you have that drill down the next thing you should do is take out the stop of your backswing.

This is super powerful!