In this part of the report we’re going to look at the backswing, and we’ll start this by looking at…

The take away is super important because how you take the club away largely determines how consistent your ball striking will be.

“The old maxim that the entire swing is governed by it’s first few inches is certainly true in my case. I can sometimes instinctively make midswing compensations to produce an effective shot after a poor start but, generally, when I start back incorrectly I hit a mediocre shot.”

And as Jack Nicklaus is quoted above, you can make compensations in your swing to hit the ball OK but you’ll be a better, more consistent golfer without forcing yourself to make in swing compensations if your take away is correct.

Sadly though, I see so many golfers taking the club away incorrectly, and by incorrectly what I really mean is with their hands. Instead of sweeping the club away with a one piece takeaway, most golfers pick it up with their hands. Doing this leads to all sorts of problems later in the swing and makes the golf swing a lot harder than it needs to be.

That’s why I teach my online students to work hard on perfecting a one-piece take away that is on plane, because that’s the easiest and simplest way to start the swing — and that makes the rest of the swing so much easier.

What is a one-piece take away?…you may be thinking.

Well, when you’re setup to a ball your shoulders and arms should form a slightly imperfect triangle like this: 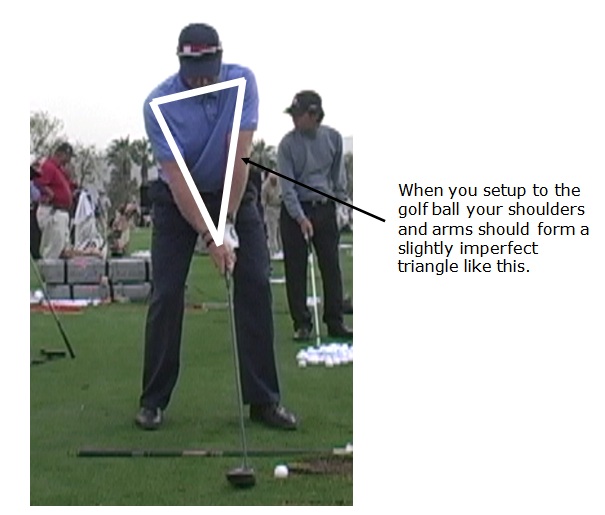 Then to start your backswing your shoulders should turn and when doing this your arms, hands and club should only move as a result of the turning of your shoulders. It’s very important when taking the club away that you do not manipulate your hands or wrists by hinging or rolling them.

Important Note: This triangle that is setup at address should remain intact until your left
hand is directly over your right leg. Because at that point the take away is complete.

When you have completed the take away the club has only moved 3 – 4 feet but it’s crucial that you get this part of the golf swing correct because it will make your golf swing a lot simpler and easier to repeat consistently.

That’s the one piece action covered but that’s not all there is to the take away, because when you take the club away from the ball you need to make sure it moves on an arc just inside the target line, NOT straight back along the target line.

Because a straight back take away gets the club traveling too much outside and causes your arms to become separated from the body. All of this will require compensations later in the golf swing which will result in inconsistent ball striking.

So you need to perfect the one-piece take away while taking the club away on the correct path.

Now we’re not talking about huge distances here. Only a couple of inches to the right by the time the club is parallel to the ground.

Also, please take special note that I said your head should also move to the right at the start of your swing. You don’t want it to remain still otherwise you run the risk of doing a reverse pivot and that’s disastrous.

OK, that’s the take away covered. And again, it’s very, very important that you get the take away correct because everything else in the swing will be much easier if you do. All right, let’s now look at a…

To hit the golf ball as long as possible you MUST create a wide swing arc on your backswing. Now to do this your arms must NOT remain connected to your upper body after the take away has been completed.

Yes, you read correctly — your arms should disconnect/move away from your body as it continues to turn. If this doesn’t happen your backswing plane will be very flat and you’ll have a very narrow swing arc, costing you a lot of distance and probably causing a slice.

Now just to clarify a bit more what should be happening as you swing. You want your arms to be connected to your turning body for the take away. But once your hands reach a position where they are level with your right leg then your arms should start disconnecting/moving away from your turning body.

This is what creates the wide arc needed to hit the golf ball a long way.

Then when your club is parallel with the ground you want to make sure that the clubface is slightly closed. But this should not be as a result of any manipulation on your part. Because if you complete your setup and one piece takeaway correctly and then continue creating your wide arc then naturally the club should be slightly closed at this position in your swing… 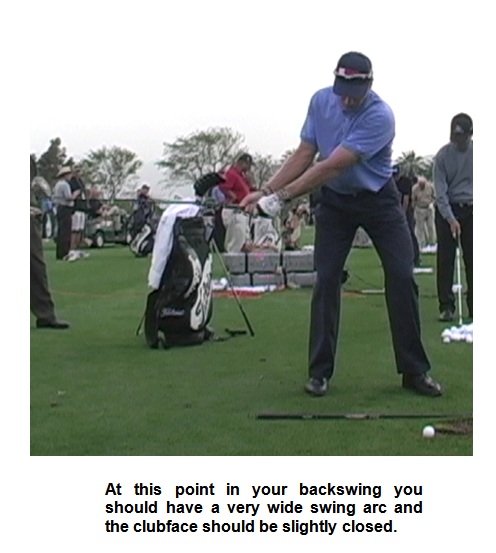 In the practice program I give my students they get a great drill to help them get into a position like being demonstrated above which naturally helps them to hit the ball a lot longer. Now continuing on from this backswing position….once your left arm is parallel with the ground, your left arm and club should form about a 100 degree angle like this… 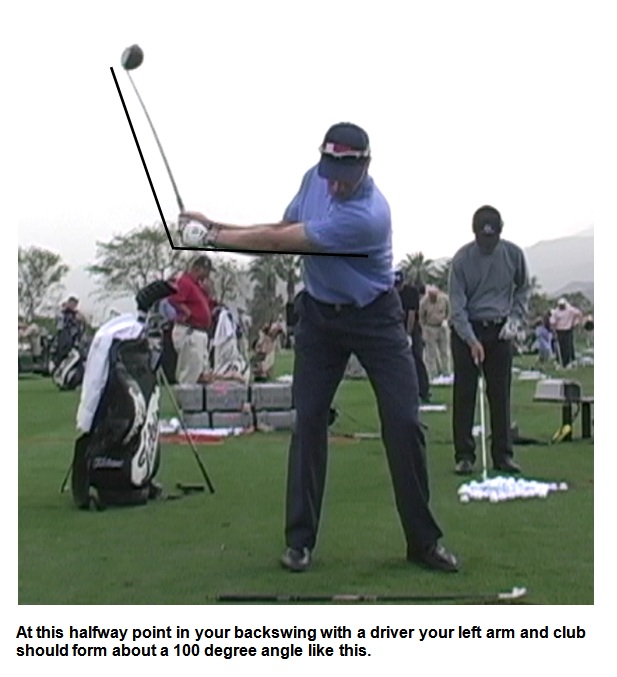 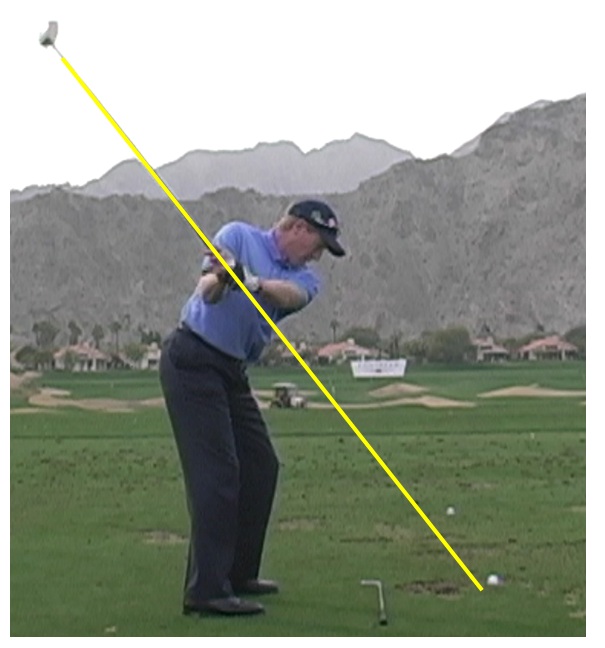 Now let’s look at your right leg and what that should be doing in your backswing because it serves a very important role.

When you setup to a golf shot your right leg should have some flex in it . Then during your backswing there are three main things that can happen to your right leg:

Unfortunately most golfers straighten their right leg completely on the backswing and this is a terrible mistake to make in the golf swing.

Because it causes a reverse pivot in the golf swing and as I’ve already said…that’s disastrous. So when you make your backswing you need to always have some flex in your right leg. That’s crucial.

OK, I’ve covered some very important things that need to happen in your backswing. Now I’m going to go over a quick summary of what should be happening in the backswing from the feet up.

During the backswing the right knee should remain flexed. It doesn’t need to remain in exactly the same place as it was at address, but it must never completely straighten at any time in the backswing. Now with your left knee you should just let it move naturally where it wants to go during the backswing, you shouldn’t try to restrict it.

By the time your club is parallel with the ground your hips should have moved laterally to the right by a couple of inches. Doing this transfers most of your weight to your right foot. But remember, it must never go to the outside of your right foot. Then after that point the lateral shifting should stop and then the matter goes to turning the hips behind you. Doing this causes most of the weight to move to your right heel.

The spine angle that is setup at address should be maintained during the backswing. You should not move your spine towards the ball or away from it as you’re swinging. And your shoulder rotation should be on a 90 degree angle (or near enough) to the spine angle at the top of the backswing.

Also, you want to turn your shoulders as far as they will go (keeping everything else the same). If you can get your shoulders to turn at least to 90 degrees that’s great, and even further would be a bonus. For example, Tiger Woods rotates his shoulders about 120 degrees!

When you make your backswing your head should move to the right by a couple of inches. So don’t try and keep it still because if you do you run the risk of doing a reverse pivot and that’s not good. Also, your head shouldn’t move up or down at all in your backswing. It should pretty much maintain the same level throughout the entire backswing that it was at setup. 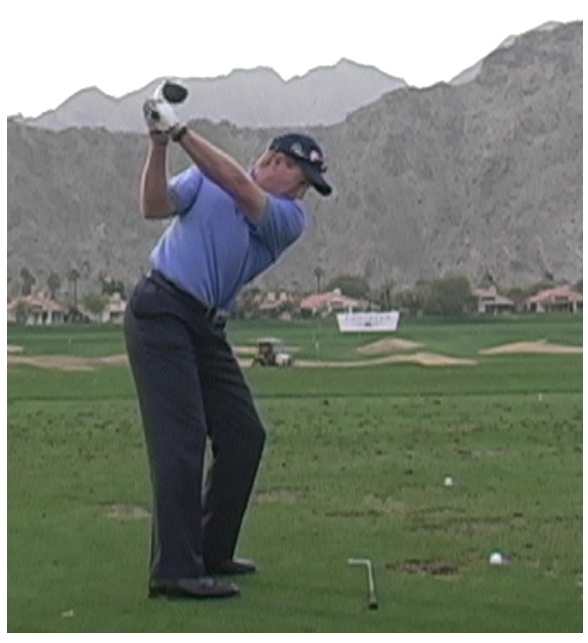 OK, let’s have a look at the clubface angle during the backswing.

OK, I’ve covered a lot of things that should happen in the backswing. But here are the three main things that are essential:

That concludes Part 2 of this long game improvement plan. In Part 3 we’re going to look at the transition from backswing to downswing. There’s some very important information I share there. So keep an eye out for when I release that.