The A Swing (By David Leadbetter) Product Review

It’s been a decade since David Leadbetter wrote a book. That’s a long time. So is this new instruction book, titled The A Swing, worth the wait? Let’s see…

First, the A stands for Alternative. The swing in this book is what David considers to be a more different swing than the norm.

All important things, but nothing earth shattering there.

Then later in the introduction he talks about what makes The A Swing different. He says the main difference is with the backswing, in that it simplifies things and makes the downswing much easier.

One interesting thing he says is that this golf swing (The A Swing) is much easier and faster to learn than a traditional swing. And to finish off the introduction he says who this A swing is for. But to sum that up… in David’s view this A swing is basically for everyone!

After the introduction there’s a chapter on why the A swing works from a scientific standpoint. This is from J. J. RIVET, who is a biodmechanist.
In this chapter Mr Rivet basically backs up everything David has said in terms of how the traditional golf swing is so hard to replicate and synchronize, and how The A Swing will help to fix those problems. He also says that his data on his findings is at the end of the chapter — but when you get to the end of the chapter he says that his testing was against a traditional swing.

But what the heck is a traditional swing?

All swings are different. Tiger Woods’ swing is completely different to Rory McIlroy. Does JB Holmes have a traditional swing? What about Matt Kuchar? What about Zach Johnson? What about Rickie Fowler?

It just seems odd that you are comparing one swing against a traditional swing and not quantifying what is a traditional golf swing.

Not only that, the findings are almost laughable.

There is no exact data because they are not comparing two swings. What they could have done is say that someone like Ernie Els represents a “traditional” swing. If they had data from something like that I would have paid some attention. But this chapter just seemed like a flimsy attempt to give some “science” to this swing method when there was none, because they are basing it against some “traditional” swing.

In the second chapter David talks about synchronization and how players, when they are playing well are synchronized…. and when they’re not playing well everything is out of sync.

I would have to agree with that. But the main focus of The A Swing is on the backswing. Basically he’s saying that if you get the backswing correct then you’ll be better synchronized and will hit better shots more consistently. I’ll have more to say on that in a minute.

Next up in Chapter 3 David covers the setup fundamentals. The main difference from the “traditional” setup fundamentals would be the grip. He states that most average golfers have a weak left hand grip and a strong right hand grip, along with the club too much in the palm of the left hand. I would have to agree with that. It’s very common to see that type of grip in average golfers. So he suggests to have a stronger left hand grip and a weaker right hand grip. This grip does sort of fly in the face of the “traditional”. But I believe it would be better for most golfers than the reverse.

The rest of what he says about the setup is pretty stock standard stuff, apart from the feet alignment, which he says the A swing works better if your feet are aligned to the right.

In the next chapter David covers the pivot, and this is pretty standard stuff too. There’s nothing that is off the wall in there, and David even admits this in Chapter 5, which covers arms and club movement. Also in Chapter 5, David goes over the most common swing faults in golfers. And I would completely agree with what he says in that chapter about the faults.

He then (finally) gets into the meat of the A swing.

What is the meat?

It’s simply to take the club back with the hands very much close to the right leg and then have the shaft very upright and very deep in the backswing. You would have to buy the book to see illustrations of this compared to what he thinks is a conventional back swing. It is quite different. And by the way, there are a lot of illustrations in this book to help you.

David then answers quite a lot of questions about the A swing. And in one question he talks about golfers that have swung the club from steep to flat, and he mentions Calvin Peete.

Now it’s funny he mentions Calvin, because before I purchased this book I was looking at Calvin Peete’s swing because of his recent death. Calvin was known as being a great ball striker. Very, very accurate.

And if there is a poster child for The A Swing it’s Calvin Peete.  So if you’re interested in seeing what The A Swing looks like then look on Youtube for Calvin’s swing. Another famously accurate golfer that has A swing characteristics is Jim Furyk.

As funny as Jim’s swing may look he swings back upright and then flattens the shaft very, very well in the downswing.

If Jim had done the opposite, which is to swing back too flat and then swing down steeply, you would have never heard of him and he would have never earned over 60 million dollars in his career.

That move of swinging back flat and then coming down too steep is an epidemic in the average golfer’s games. Anyway I digress, back to the review….

Next, David talks about the downswing and he says:

“You have to consciously think about some things initially when learning
the backswing, but the downswing, which takes about a third
of the time to complete, is reactive. If your backswing is properly
synced, your torso is wound, and the transition is good, the
downswing will largely happen as a result of gravity and centrifugal
force.”

Now I totally disagree with this, because if a golfer swings back too flat then comes down too steeply they have ingrained a steep downswing pattern. That is not suddenly going to change just by changing the backswing movement to be more upright in terms of the swing plane.


In Chapter 6 David gives some drills and advice to help you groove the A swing, along with some advice on shaping shots and trouble shooting advice.

Finally, in Chapter 7 David gives a 7 minute practice plan to help you implement the A swing, plus some there’s some fitness exercises.

David Leadbetter said in this book that he’s always taught a steeper backswing plane and a shallower downswing plane. Nick Price is a good example of this. So I think this book should be renamed The E Swing.

Because that’s all this is. The backswing plane is very steep and deep. Like this Calvin Peete backswing: 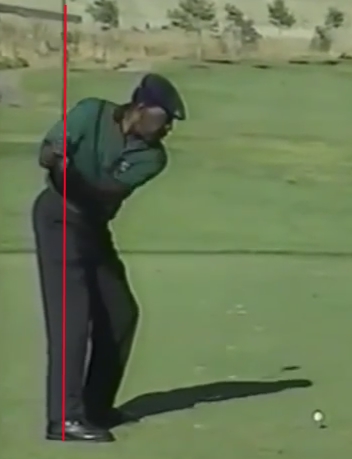 But if the average golfer that takes the club back too flat and inside and consequently comes over the top, does an upright and deep backswing plane like this, I am not convinced that they will magically loop it to the inside on the downswing like Calvin did. Here is a picture of his downswing position at the half way point: 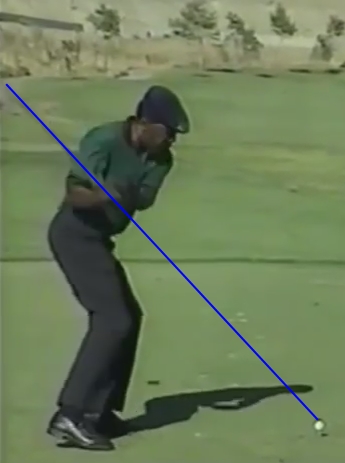 See, that’s a perfect half way into the downswing position.

That’s what the golf swing is all about. Getting into a great position in the downswing to hit the ball reasonably straight and long most of the time. There’s many different ways of doing that.

But if a golfer has done the reverse for so long, I don’t think it’s ever going to happen overnight and definitely not in 7 minutes.

Now reading this review, you may have thought I was very critical of this book. And in some ways I am, because it’s just an exaggerated move over a conventional type of swing. There’s nothing new here. But I think for most people who buy the book that will be a very, very good thing. Here’s the reason why.

When most golfers try to do a swing change they often don’t make a change. They feel as though they are making a change but they aren’t really changing their swing. Feel and real are never the same. And often I get golfers to try and make a swing change and then I show them on video the “new” swing. Most golfers are shocked that their “new, much different feeling swing” looks almost identical to their “old” swing.

But what David is suggesting in The A Swing book is so exaggerated, it may just help more average golfers to get somewhat close to a good swing plane going back and through. And if they do that they will improve. 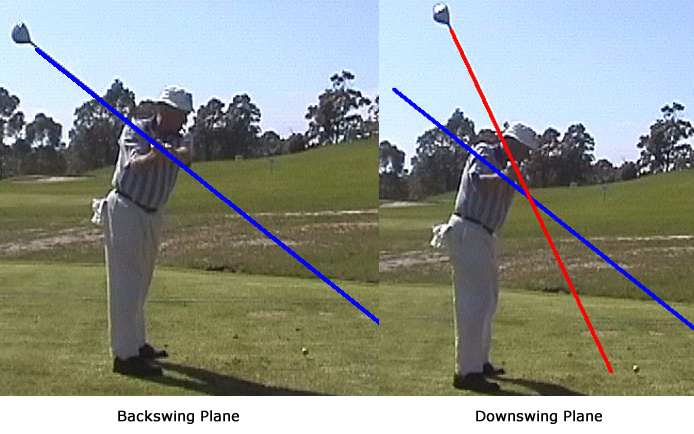 ….then you should get and try The A Swing. Because you have absolutely nothing to lose.

Swinging back flat and then coming down steep is NEVER going to help you hit the ball the way you want.

But if you have always come over the top you will have to work hard on looping the club on the inside on the downswing.

So that’s my review of The A Swing. All and all, it’s not going to be a panacea for golfers, but if the average golfer reverses their bad swing plane they will hit the ball better.

Overall Opinion: Recommended for golfers that swing back too flat and come down too steep.