I first heard about these wedges through a big online golf website that touted these wedges as the best thing since sliced bread.

And the marketing was slick. In fact, it was so slick that I purchased these wedges without seeing or trying them in person. More on that later.

The major reason I purchased these wedges was because of the sole. Looking back that’s the difference with these wedges over “normal” wedges.

As you can see in the photo of the wedges above… they have a scoop out of the sole. That has something to do with fixing the bounce on wedges. They say that because the wedges of today are designed to be used out of bunkers, it makes it tough to play shots from conditions outside of sand.

Now that scoop out of the sole is designed to lower the leading edge of the club, while increasing the bounce.

What does that do?

On the Renegar website they go into quite some detail about the reason for the scoop out of the sole. So by all means, go to the website if you want to know more about the technicalities. But I’m more concerned with performance than technology, so let’s carry on.

I received these wedges very quickly and they were well packaged. But when I opened up the box I was a bit shocked at the appearance. I had read how good they looked, so I expected a great looking wedge.

The wedge shape itself was fine, although it did look quite large, but the appearance was dull. Here is a picture I took of one of these wedges just after I received it: 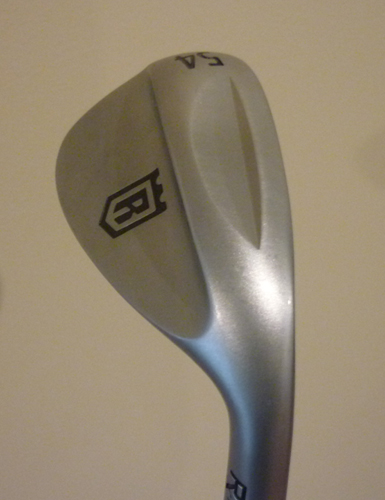 Looks quite different to me than the photos I’d seen of them. Also, they have a white line on the bottom groove, which I found quite odd and made the club look cheap in my opinion.

But if this wedge performed, I didn’t care what it looked like. So I took the wedges out for a quiet nine holes and hit them from a variety of places.

When I did this I found them very difficult to hit from the fairway, but fantastic out of bunkers. Which is kind of odd because I expected the opposite.

The conditions were pretty wet when I tried them out first of all, and I couldn’t stop fatting them from the fairway. They just didn’t seem to have any bounce to them, they just dug into the ground.

So when I took these wedges into a real game situation I didn’t have much confidence in them to be honest, and things went from bad to worse.

With my normal wedges, a bad shot is a fat one and these wedges seemed to exaggerate that problem for me. I was chunking my way around the course with these wedges, and I was dreading having a wedge into the green.

If the ball was in the bunker however it was great. I played some absolutely awesome bunker shots.

But my confidence with these wedges overall was terrible. I just could not play them.

And that’s an important lesson for all of us.

If you buy a golf club, sight unseen, and listen to marketing hype then you could be disappointed big time, like I was.

But I have no doubt that another golfer will get these wedges and find them the best wedges they’ve ever played. We’re all different. There isn’t one club that fits all.

So like with all of my golf equipment reviews, please take this advice… try before you buy!

The golf grips that come with these clubs are longer than standard, and they’re fine (Lamkin 3Gen wedged grips). But there was something very odd about the grips. You see, they said in the marketing material that the grips had circles on the grip so you could choke down to the specific places. But here’s what is really strange… the circles were on the underside of the grip. Here’s some pictures of this:

But I have seen grips like that with the circles on the front, which makes way more sense to me.

The shaft that came with these clubs was the KBS Wedge steel shaft and that’s a good shaft, so no complaints there.

So in summary, these clubs just didn’t suit my golf game. And that’s always a danger when you buy any club sight unseen. So I urge you… before you listen to the hype on any club, try before you buy.

And if you can’t do that, then make sure you can return the club for a refund if it doesn’t work out. Renegar Golf have a refund period on their clubs, which at least is some safe guard if you want to just try these clubs and see if they work for you.

Overall Opinion: Try before you buy!