This golf swing analyzer promises a lot – but does it deliver? Let’s see…

This golf swing analyzer is not cheap at $799 retail. And for that you get the mat that you see above, along with golf tees, software, soft golf balls, tape for the bottom of your clubs (more on that later) and the cords to attach the mat to your laptop or computer.

The company that sells this device also has packages where they have the same device, but also included is a screen to hit into with a projector, a mat etc., etc. The full professional virtual course.

So this version that I’m reviewing is a heck of a lot less than that!

But just so we’re clear, even if you got the almost 14K version, you would get the exact same mat device that is pictured above.

Now the idea behind this device is very simple. Once you set it up you then simply swing over the sensors, and up on your computer screen it will give you the crucial metrics for your swing. Here is what you’re given after each shot:

Once I received this device, setting it up was simple. I just put it on the ground and followed the instructions given to set it up so it was connected to my laptop. And after about 5 minutes of the software starting to be installed I was ready to hit.

I was almost a bit weary that it wouldn’t even work because the setup was almost too quick and easy.

But then lo and behold, after my first shot with an iron I got instant feedback on the important metrics of my golf swing.

Here’s a screen shot of the type of data you’re presented with after a shot: 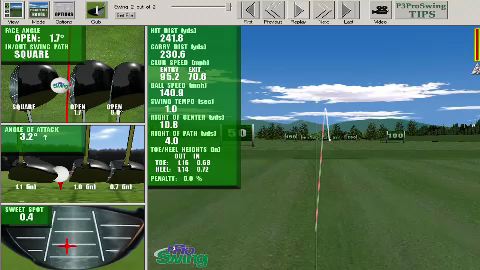 Before I get into explaining that, I will say that this is using the driving range aspect of the software. You can play full games with this device, but more on that later.

So how does this device get its data? Well, the pad that you’re swinging over has 65 infrared sensors which reflect light off of your clubs and back into the sensor – providing detailed information about your swing. Here’s a picture showing this:

When I first started playing around with this device I was using my irons and I was getting readings every shot. Then I tried my driver and got no reading at all.

Now there’s no doubt about it, this is a bit of a pain and something you don’t want to do all the time. But if you have a spare driver then you can simply put the tape on that driver and use it.

But the company that sells this device has a driver for sale that is already pre-fitted with the black look along with a silver line on it, so you don’t need to worry about putting tape on a driver. Here’s a picture of this: 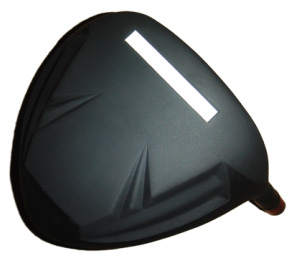 I didn’t get this however. I just used the tape on a spare driver and it worked fine.

Before I got this device I did research online into what people thought of it. The main issue I found from doing this is that some people had accuracy issues because of lighting.

With this device you can’t use it outdoors.

It must be used indoors, and here is what their website says about this:

Well, anyway, I just set this up in my garage and used it without any thought to lighting.

I used this device during the day and at night.

And because I’m a pretty good golfer I felt as though some of the readings were wrong in terms of the clubface path and alignment.

So I built a pendulum device to see how accurate this device is in terms of clubface path and alignment. When I tested this device with my pendulum, this is what I found…

It’s very accurate, BUT there was a 2 degree variance at night time as opposed to day time.

So when I set the pendulum up during the day to swing straight back straight through, it would record the details perfectly. Both path and clubface alignment.

But the same settings at night would mean the path and clubface alignment would be 2 degrees out at anytime. So if the path should have been straight and the same with the clubface, it was showing readings of 1 to 2 degrees open or closed for the path, and the same for the clubface.

Without the pendulum I would never have known this.

And this clearly was a lighting issue.

That is obviously a big issue! And it has meant that I pretty much only ever use this during the day.

Anyway, that’s a bit of background on this device. After using it, what do I think?

Well, this is one great unit that does what it’s designed to do at a price that is affordable for the serious golfer. You get the crucial metrics at impact and they’re accurate as far as path and clubface angle is concerned.

I did find that sweetspot reports were not that accurate and neither were the angle of attack.

Now even though those two metrics are very valuable, it’s very easy to get feedback on where you are hitting the golf ball on the face by simply using a spray-on product on the clubface, or some impact tape.

And the angle attack gave some funny readings that weren’t accurate. For example, when I was putting it was saying my attack sometimes was 12 degrees down!

But most of the time it was pretty good. So this device will give you a guide on other swing metrics, but don’t them as gospel.

As far as what you can do with this device, the software gives you the following options: 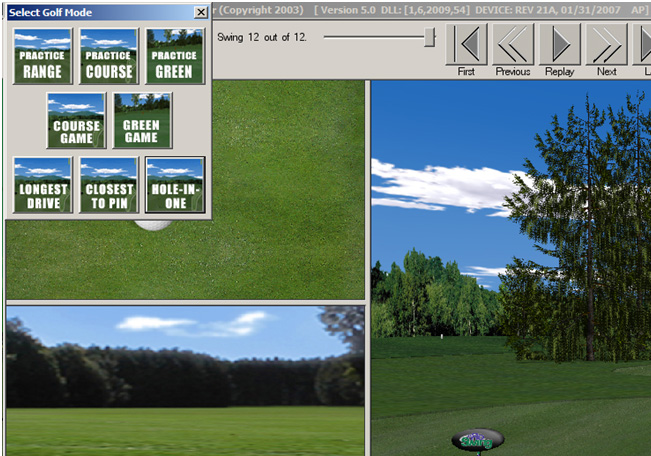 Let’s go through them starting with Hole-In-One.

I assume this is meant to be a par 3 where you try and get a hole in one. And you get to try to do this over and over again. But when I clicked it, I got a 440 yard par 4. Hardly an easy hole in one try! I also got the same with the longest drive and closest to the pin options. I’m not sure what was going on with that.

Next up you have green game. This is just like you’re on a practice putting green, putting from one hole to the next. Putting on this thing is not very good. The only good thing about it is that it gives you feedback on your path and clubface position. Apart from that, there’s no point in trying to hit putts the correct distance.

Then we have course game. This is where you play an 18 hole golf course. It’s a bit of fun. But for a serious golfer it’s just too unrealistic. With a group of people it’s a bit of a laugh however.

The other options you have are practice range, practice course and practice green.

These are the options I recommend the most with this product. Particularly the practice range. Because that’s where you can select the club you want to hit, and hit that club over and over again and get instant feedback on the path and clubface alignment at impact… along with the other metrics (which, again, don’t appear to be 100% accurate).

However, there is one big problem with getting this information almost instantly.

You get so caught up with what is happening at impact that you don’t follow-through properly.

If you get this product you need to force yourself to follow-through properly, and then look at the results afterwards. The impact data stays on the screen for a while so you don’t need to rush. And if you miss it for whatever reason you can go back to the shot data with a click of the mouse.

All in all, if you’re a serious golfer this is definitely well worth the money. It will help your ball striking no end! Especially if you are stuck indoors over the winter months. And the quality of the mat is top class. I’ve been using this for a while now and the mat on top of the sensor is not showing any wear and tear.

To find out more about this device simply go here.