Bubba Watson hits it long – there’s no doubt about that.  Recently I was watching Bubba’s swing, and I noticed something he was doing that is a BIG reason for his long driving.

So I’ve made this video below, in which I reveal this long driving swing move… and then I tell you how you can practice it.

If you would prefer to read about this golf swing secret of Bubba Watson’s instead of watching it, I have a summary of what is in this video underneath it. So, either watch the video or read the commentary below the video (or do both :-)) .

At the top of Bubba’s golf swing, he has obviously turned his shoulders a long way and his club is well beyond parallel.  But his hips have also turned a long way too. 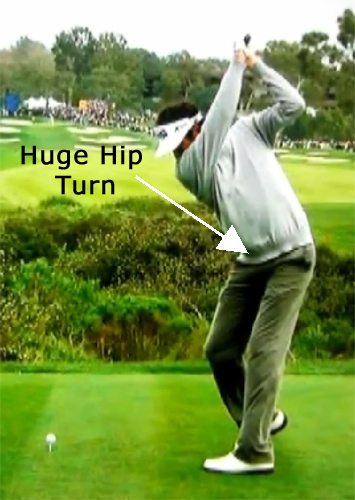 Then to start his swing, Bubba Watson unwinds his hips a long way, very fast.   By doing this it creates a big separation between his hips and shoulders, so his hips are very open and his shoulders are still closed.

From the position the picture above shows, Bubba hardly turns his hips any further, as the impact picture below shows.  So what’s happening at impact is… all of the energy that has been created by the big separation of the hips and shoulders, is unleashed into the golf ball.  And Bubba is using the ground to gain even more power, because he is pushing up off the ground (that’s why Bubba’s right heel is up off the ground).  When you do that it means even more power can be imparted to the ball.  It’s a very common move professional long drivers make. 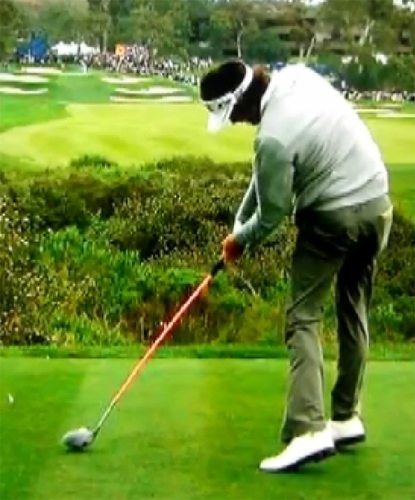 If you look at Bubba’s hip rotation at impact, and then compare it to his hip rotation half way into his follow-through, you’ll notice that the hips have hardly rotated any more… 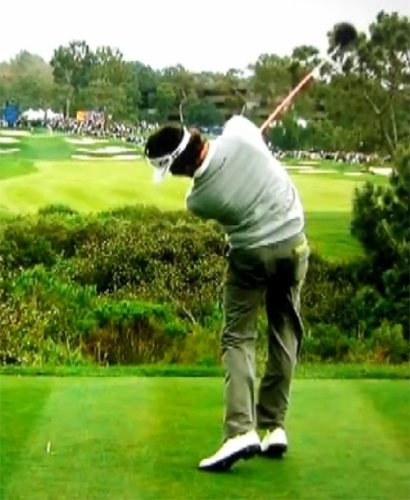 So you’ve got to understand this if you want longer golf drives.  From the top of your swing you want to unwind your hips as quickly and far as possible, while making the gap between your hips and shoulders as big as possible.  Then you actually want to stop trying to turn your hips, and brace yourself for the hit so you can unload all of the stored up energy into the back of the ball.

The best way I suggest you train to do this is to get an impact bag.

Once you have an impact bag, then setup to it as though you’re about to hit a real shot. Swing back to the top of your backswing, and from that point unwind your hips as fast as you can and unload into the impact bag. And when you’re doing this you can practice moving up at impact, so you’re using the ground to create more power. 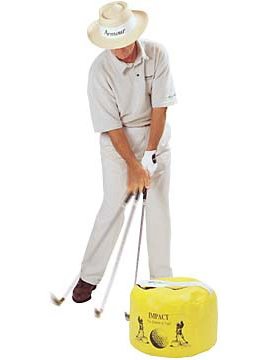 Brace Yourself For Impact So All Power Goes Into The Bag

This is a great way to practice this move, because you’re going to naturally brace yourself for the strike as you’re hitting into a bag and not a golf ball.

If you practice this you too will hit longer drives. Maybe not Bubba Watson long – but you will be longer. And if you need an impact bag go here to get this one that I recommend.