Do You Want to Unlock the Pro's "Secrets to the Mental Game" and Learn How to Train Your Mind for Maximum Performance on the Course?

Keep reading because I'm going to share with you the secrets that golf's most mentally tough" players use to think clearly on the course, outwit their playing partners and ultimately shoot lower scores.

Oh and Did I Mention You’ll Only Pay If You Get Results? It's True﻿﻿﻿!

Do you hit the ball well on the range & drain a truckload of putts on the practice green, but when you take it to the course your game just isn’t there?

I mean where did it go? It was almost seeming a little “too easy” just a few minutes ago, right?

The Mental Game is probably the most important aspect of the game, yet it often gets the least amount of attention.

In reality, it doesn’t matter how good your fundamentals or mechanics are if you can’t take it to the course and execute under pressure.

So when you play, do you ever experience any of the following?

If any of the feelings above sound familiar then pay close attention. I’m about to show you step-by-step how you can play every shot with full-confidence and truly “Master the Mental Game”

I’m going to share with you the same closely-guarded secrets top professionals use to get “in the zone” on every shot while being totally committed and confident while standing over the ball.

I know…sounds too good to be true, right?

I can assure it’s possible to master the mental game quickly, but only when you know what you need to do!

I know this because at one point in my golfing career I was a total headcase!

I would stripe shot after shot on the range, and make 6 footers on the practice green like they were going out of style.

The problem was when I got to the course...it was like I completely forgot how to play.

Sadly, the secrets needed to master the mental game have (until now) only been available to top professionals and elite amateurs who could pull out their checkbook and drop a few thousand bucks on insider secrets.

It’s the old case of the rich getting richer!

For decades the average golfer has been subjected to confusing, conflicting instruction (especially when it comes to the mental game).

Whether it’s a playing partner, your local pro, or even a “shrink” you paid big money for...you probably haven’t gotten the best advice for your mental game.

Do you know why most advice on the “mental game” is an epic failure?

It’s because you are told to do something, but aren’t shown HOW to do it. Here’s a classic example:

“You just need to play one shot at a time.”

Sounds great in theory, but how on earth do you block out all of your golfing demons and actually do it?

After all, you wouldn’t just tell a kid who can’t ride a bike to “go ride a bike” would you? Would that child be able to just hop on and magically know how to ride a bike? Of course not!

It’s the exact same with your mental game.

You need to learn how to train your brain so that playing “one shot at a time” is automatic... just like riding a bike. You don’t have to think about it... it just happens as a result of the right mental approach.

Think about it... I bet some of the best shots you’ve ever played in your life occurred when you addressed the ball and just thought “screw it... I’m just gonna swing!”

I’m going to show you how to “recapture the magic” and hit nearly every single golf shot like you know you are capable of...without overthinking. 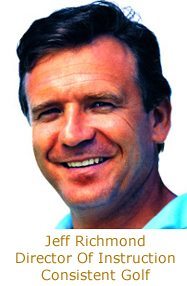 I have been playing golf for over 25 years and for the first 5 years or so I was getting better and better until I was averaging par golf. Naturally I had dreams of playing on Tour and stupidly thought to get there I needed to create the perfect swing to keep on improving.

In my attempt to build the perfect swing I gradually got worse and worse until eventually I was averaging just below 80 and every game was a mental battle.

Then after another bad round I finally hit rock bottom. I was ready to quit the game for good...until I realized something…

Golf is 90% mental, and your mind is the single most important influence over how you swing the club, and what scores you shoot.

Deep down, every golfer knows that the game is played in the 6-inch space between your ears. After all, despite the modern technological advancements in the game, golfers still struggle and scores haven’t dropped in the last 50 years!

In fact, limiting your mental mistakes and becoming a mentally strong player are the only things you need to do in order to play fearless golf, shoot lower scores, and have fun on the course again!

But just like you...I took the mental game for granted…

After all, there are so many “shiny objects” and training aids on the market, improving your game can’t possibly be as simple as sharpening your mind...right?

When I took a step back and analyzed why I was playing poorly, I realized that a technically perfect golf swing wasn’t going to do me a bit of good if I couldn’t keep my head on straight for 18 holes.

My scoring problem wasn’t a swing problem, a short game problem, or a putting problem...it was a big, fat, gigantic mental block that was keeping me from playing my best golf consistently.

Now that I had identified my problem, I was anxious to start looking for a solution. I read books, listened to tapes, read articles, and even talked to a few “old pros” trying desperately to get the answers I needed.

And you know what I got in return for all of my efforts?

I had no clue what to do. I even looked into hiring a sports psychologist, but those guys don’t come cheap and there were no guarantees it would even help.

I was truly stuck.

Some “old pros” suggested I go whack a bunch of balls on the range and “figure it out,” but that didn’t work

So I set out on a journey…

I wanted to step outside of the main stream golf media (including all the “gurus” who were getting rich selling me a bag of tricks), and find out what was actually working for the best golfers in the world.

I spoke to a few top pros who were playing in the highest pressure situations imaginable, yet were executing flawlessly under pressure with trophies and thousands of dollars on the line every week.

Once I was able to piece together everything they were doing to be mentally tougher than 99.9% of golfers on the planet, I decided I was going to go through everything, break it down, and put it into a simple, step-by-step training program that I could share with average golfers everywhere.

The results from my “training” were shocking…

Once I “got my head on right” I was able to start shooting lower scores while hardly ever practicing. To be honest it was strange...I felt like I was cheating or something!

I mean, you’re supposed to have to put long hours in to become a better golfer right?

Yet here I was, hitting solid golf shots consistently, holing more putts, and hitting delicate flop shots over bunkers without even thinking about chunking, sculling, or s***nking it!

I had achieved amazing results while practicing simple drills and exercises from the comfort of my own home!

I still remember how nervous I was...I mean I had seemingly “cracked the code,”...but would it last?

Sure enough I played another round, and another, and another...with the exact same results! I was so excited that I put a detailed training program together to help as many golfers as I could.

Hundreds of golfers just like you have gone through the program, and their results have been amazing. Here are just a few of the many stories I’ve received from some of my students: